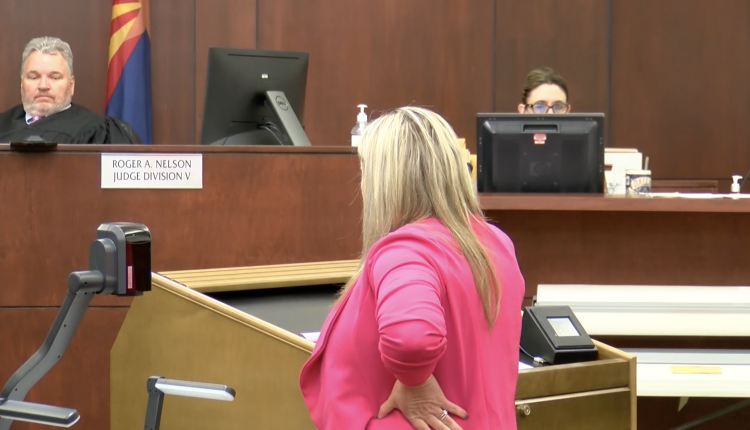 YUMA, Ariz. (KYMA, KECY) – A key witness took the stand on Tuesday in day two of the Econo Lodge Motel murder trial in a back-and-forth testimony.

Disturbing images of the scene after Luis Delgadillo was shot and killed outside of a motel in Yuma back in August 2020 were displayed to the jury in Yuma County Superior Court.

This just one piece of evidence presented, along with the questioning of one witness by state prosecutors.

25-year-old, Izak Lucero, is the one accused of pulling the trigger and being behind the wheel of the car that fled the scene. He’s facing a potential life sentence that could culminate by the end of the month.

Inside of that car was the teenager who took the stand Tuesday. He was front and center of a back-and-forth testimony, contradicting a lot of his statements to police investigators on August 24th, 2020–just two days after the murder.

The witness was just 13 years old at the time and will not be named.

State prosecutor, Meaghan Gallagher, questioned the teen for more than two hours about his relationship with Lucero who was referred to as “Sniper.”

The witness claimed he did not know who “Sniper” was and did not remember what took place that day, including who had the gun and fired it in a car of four people.

This despite his statements from August 2020 that identified Lucero and claimed he had the gun.

Lucero is charged with six felonies. The charges include second-degree premeditated murder, misconduct involving weapons, aggravated assault, and three other drug charges all related to the crime.

In January, Lucero rejected the plea offer from the state that would have reduced his sentence to just 25 years behind bars. Now, ultimately leaving his fate in the hands of a jury.

If convicted, he could face life in prison.

The trial will continue through the end of the month.