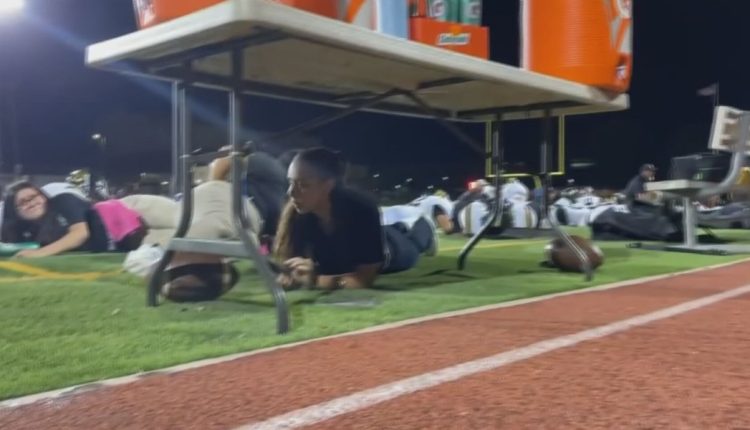 Witnesses say they heard the shots during the fourth quarter as Carl Hayden was playing the Douglas High School Bulldogs around 9 pm Video shows some students and players lying on the field and underneath tables. Meanwhile, in the stands, spectators were lying on the bleachers. Witnesses say everyone had to go into the auditorium for safety and were moved away from the windows. The game was officially called shortly after the incident.

Brittany Bowyer was at the game and described the terrifying moments. “So I actually just got released from the auditorium. They’re letting people go in little bouts. Right now in the parking lot, there’s police everywhere; police have a whole perimeter set up around the school,” she said. Bowyer said she was standing on the visitor’s side of the field when shots rang out. “Right when we heard the first two go off, dads said ‘get down.’ Douglas head coach said ‘get down.’ Everyone just kind of dove for cover. It took a minute for the announcer to realize what was going on, but then once he realized, he told people to get down.”

Bowyer said everyone had to stay on the ground for at least two minutes before they were ushered inside the auditorium. She said everyone was inside for at least an hour. “It was really unexpected. They were on the field and it was a lot of shots. It just kept going and going,” she said. “It’s been a wild night over here.”

Arizona’s family crew was at the school and saw parents and students lingering in the parking lot. Several police cars were lined up around the school. Phoenix police say no injuries have been reported and officers are still at the school. It’s unknown what led up to the incident or if police are searching for suspects.

SCARY situation when everyone in the stadium is ordered to the ground after a tone of gunfire went off in a drive by shooting here at Carl Hayden on the road behind the school. pic.twitter.com/ua8j008na2