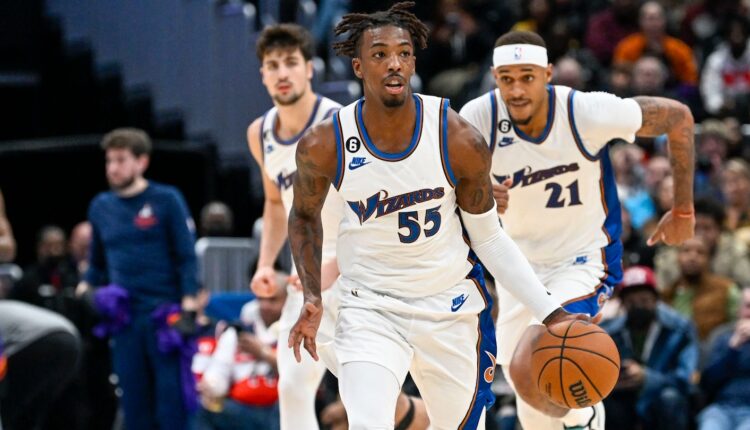 Since his return from a nearly two-month absence because of a hamstring strain, Delon Wright has maintained that his feel for the game will return slowly. The Washington Wizards backup point guard expects that regaining his conditioning and his feel for his shot will be a gradual process with an unknown end date. One thing he was sure of: His defense would be ahead of his offense.

Wright might have been underestimating himself on that last point. He played defense Wednesday as if he hadn’t missed a game.

The Wizards registered their third straight victory with a 127-102 win over the Phoenix Suns on Wednesday night at Capital One Arena. They did so without Bradley Beal (left hamstring soreness), making it a triumph in which Wright reminded the Wizards — again — just how valuable he is.

When Kyle Kuzma was asked on the court afterward how Washington had turned a 10-game losing streak into this promising stretch, his response was short: “Delon Wright. We got Delon Wright back.”

The Wizards started well, but just as they did in Phoenix eight days earlier, when they gave up a 17-point lead in the third quarter, they watched as a 19-point first-half lead was winnowed to four near the end of the third.

With 1:02 remaining, Wright set up Deni Avdija for a dunk, then had a deflection and a steal for a fast break that resulted in a three-point play. He capped it all off by stealing the ball from Chris Paul — who owns the sixth-best assist-to-turnover ratio in the NBA — to leave Washington (15-21) with a healthier 93-84 lead before it dominated the fourth quarter 34-18.

“I felt like I had to do something to help the team,” Wright said. “Getting steals always helps.”

Said Coach Wes Unseld Jr.: “He makes the most of those minutes, impacts the game right away. His defense ability, size, athleticism — he’s got just great feel and timing. He comes away with deflections, finds a way to get to those loose balls, and … those are momentum plays. He single-handedly, in my opinion, changed that stretch.”

Wright, whose first game back in action tipped off this winning streak, finished Wednesday’s game with just three points, one rebound, three steals and three assists in 15 minutes — but his fingerprints were all over the win, just as they were Tuesday during a convincing victory over Philly. In that game, Wright pestered James Harden and zipped around the court to contest shots with sharp defensive know-how that his teammates raved about.

“Tonight, Brad was out, so I knew I had to be more aggressive on the offensive side because we had to score,” Hachimura said. “I was trying to be more efficient. Today, everybody was sharing the ball. I think it was good.”

The Wizards owned the paint to start the first half, shot crisply and rebounded well to grab a 19-point lead in the second quarter. Center Daniel Gafford, who started alongside Porzingis again in a supersized lineup, was active and helped set an energetic tone. For the game, Washington shot 57.3 percent. Deandre Ayton led the Suns (20-16) with 31 points and Paul had 20, but they couldn’t keep up without Devin Booker, who will be out at least four weeks with a groin strain.

The Wizards were missing their own star guard, but no matter. Another guard stepped up to help lead the team to another victory.

Here’s what else to know about the Wizards’ win:

How Luka Doncic beat his own records to make NBA history

Beal was a game-time decision. He tested his hamstring during pregame warmups in which he appeared far less mobile than normal — he mostly stood near the basket or at the free throw line, apparently testing to see whether he could push off his left leg while shooting — before the Wizards announced he would not play.

Asked whether Beal had undergone imaging after a report from the Athletic indicated he underwent an MRI exam, Unseld said, “He’s been fully evaluated.”

After he was hurt late in the fourth quarter Tuesday, Beal was visibly upset, pulling and snapping his headband in frustration. He had returned to the court Dec. 18 after missing six games with a right hamstring strain — and earlier missed five games in November after he tested positive for the coronavirus.

“You can tell in his body language, I think there’s some frustration,” Unseld said. “He wants to be out there and help generate his own rhythm and feels like every time he gets a few games under his belt, you’re plagued with something. I can understand the human side of that.”

Even without Beal, Unseld kept his rotation short until the final 1:58, when he emptied the bench. Wing Will Barton, a starter for Denver last season, did not play for the second straight game. Backup guard Jordan Goodwin and forward Anthony Gil appeared only in garbage time.

Gafford scored 10 of his 14 points in the first half and spent the bulk of his time contending with Ayton on defense. Gafford also pulled in eight rebounds in 25 minutes.

A spectator was escorted from Capital One Arena late in the fourth quarter. A security guard asked the fan, who was seated on the floor next to the Phoenix bench, to leave before the two had a brief altercation and police officers came over. An officer led the fan up the arena stairs.