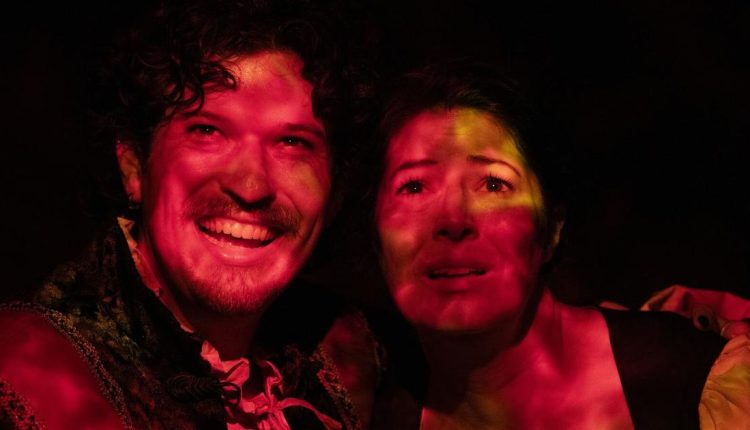 It takes a woman to best the devil.

Chris Bush’s “,” is now on stage at Tucson’s Scoundrel and Scamp Theatre.

Faustus is male in the classic versions by Christopher Marlowe and Goethe. And truth be told, when he sold his soul to the devil he made a lousy deal and squandered the power he had.

In Bush’s version, the female Faustus negotiates 144 years before the devil gets his due (the male version only got 25), she insists on good health and not aging and demands the ability to skip forward in time.

So we have a Faustus who starts in the 1600s and ends in the 21st century. Lucifer has given her Mephistopheles (a breezy Zachery Austin) to do her bidding, but once she orders him to get rid of the plague in London and he burns the city down to do that, she decides she will only use him as a sort of assistant. She is determined to do good.

She befriends famous women in her time travels, becomes a feminist and a wildly respected scientist. And she is intent on finding the key to immortality — if she never dies, Lucifer won’t be able to collect.

The Scoundrel and Scamp production, directed by Raulie Martinez, is the American premiere (the world premiere was in London in 2019).

Johanna Faustus is a meaty role for a woman and Callie Hutchison is fierce in her portrayal of the strong, determined woman. Michael Levin played her father as well as Lucifer and switched with ease from a kindly man who loves his daughter to a devil who lusts after souls.

The production was clunky at times, with awkward scene changes and uneven acting, but it was also compelling with its creative use of masks, mixed media and silhouettes.

The biggest problem with the play is Bush’s script. While the idea of ​​a feminine Faustus skipping through time and making her mark on the world is rich, Bush is trying too hard to make points about women, religion, patriarchy. It’s too ambitious and after a while, the play begins to bog down.

Tickets are $30, with discounts available. For tickets or more information, call 520-448-3300 or visit scoundrelandscamp.org.

Kathleen Allen has covered the Tucson arts scene for more than 30 years.