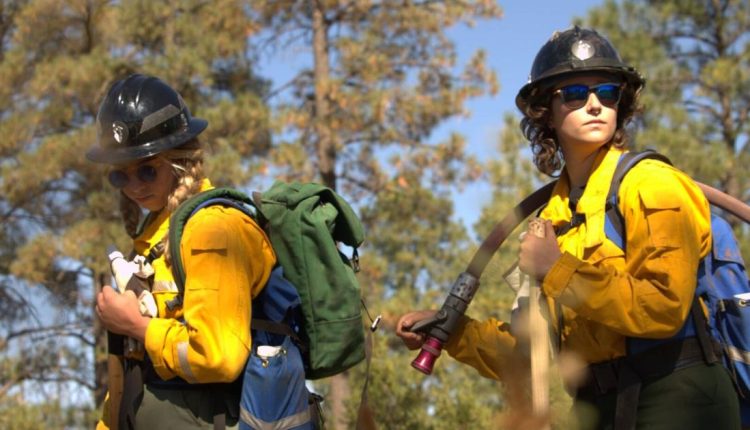 The next, it was raining ash across her town. The sky was hazy with smoke. Fire engines, bulldozers, water tanks and crew buggies were scattered across the parking lot of her job as United States Forest Service employees turned the county park into a makeshift Incident Command Post – the hub that worked nonstop for the following weeks to fully contain the 2019 Museum Fire.

“(The) Museum Fire scared Flagstaff a lot,” she said. “It was really close to town. I could look out from my apartment and just see it burning down the mountain.”

The 23-year-old Collier was one of 20 participants in this year’s Apache-Sitgreaves National Forests Women in Wildfire bootcamp event. The event, which is hosted annually over the course of two consecutive three-day weekends, trains participants in wildland firefighting. After a slew of class work, field work and fitness testing, women are certified as Type 2 Firefighters, and are eligible to apply for wildland firefighter jobs across the US Forest Service.

Which is exactly Collier’s goal.

“I’ve spent the last few years being like, ‘Hotshot. I’m going to be a Hotshot,’” she said. “That’s kind of still where I’m at.”

Collier, who obtained a degree in forestry and a certificate in fire ecology and management from Northern Arizona University in May, said she plans to apply for a position on the Apache – Sitgreaves Black Mesa Interagency Hotshot crew, but said any position working in wildfire sounds awesome.

“I would be happy to be on a hand crew or an engine, or whatever I can get,” she said. “It seems like a community, and it’s a greater purpose to work toward.”

Flagstaff resident and NAU student Maggie Helmen, 20, was also compelled to apply for Women in Wildfire after seeing recent wildfires threaten her friends and family. Helmen said she had friends that evacuated during both the 2022 Tunnel and Pipeline fires.

“We could see the smoke billowing up and it was scary,” she said. “I just felt really useless and I was like, ‘dang, I need to be doing something,’ and I couldn’t.”

Helmen then connected with a friend who worked in wildland fire, who started mentoring her. Shortly after that, she worked with an adviser at NAU to complete her application for Women in Wildfire.

Helmen and Collier are two of the roughly 80 women who applied for the training.

Classroom work includes a walk through the job application process, lectures on wildland firefighting strategy and safety, demonstrations on packing for a fire assignment and lessons on monitoring wind and weather.

While out in the field, participants get hands-on experience operating fire engines and heavy machinery, deploying emergency fire shelters and using various hand tools to “build line” – creating a physical barrier between a wildfire and burnable fuels, such as dry pine needles and dead trees, by digging down to mineral soil.

On the last day of training, participants sat down in front of their computers to submit job applications and jumpstart their careers in wildland fire.

Gilbert resident Crissy Parmer, 32, said she planned to apply for positions on engine and helitack crews.

Parmer said that – while she’s been interested in fire from a young age – experiencing the 2021 Dixie Fire while she was living in Quincy, California, prompted her to start seriously pursuing firefighting as a career.

“We got evacuated,” she explained. “Watching our town kind of being overtaken by fire… watching wildland firefighters come in… the support and the love I felt that the town felt toward these men and women that came was just incredible. I was like, ‘I want to be a part of this. I want to help communities like this.’”

Estes Park, Colorado resident Taylor Hartman, 27, also felt the draw toward wildfire after experiencing both the East Troublesome Fire and the Cameron Peak Fire while working for National Park Service.

“One of the fires had… extreme fire behavior, and actually jumped the continental divide, and came down through this park, through this place that I love, and into town,” she said. “We evacuated folks from the backcountry, we evacuated everybody from town and we evacuated ourselves. It was kind of a life-changing moment.”

While Hartman said she originally planned to take the training just to learn more about wildland fire, she concluded the two weekends with a heavy interest in joining a fire crew.

While most of the women in Wildfire participants spent their last day of training brushing up their resumes, some concluded their news skills could still benefit them.

Meredith Prentice, 28, moved to Las Vegas, New Mexico, back in February for an ecological monitoring job.

Shortly afterwards, she was confronted with both the Hermit’s Peak and Calf Canyon fires.

“I had never lived that close to a wildfire before,” she said. “Living through that in a personal way and having friends and coworkers very intimately impacted by that, it just made me want to learn more about wildland firefighting.”

While Prentice doesn’t plan to quit her job to pursue a new career in fire quite yet, she’s excited to use her new firefighter qualifications to help conduct prescribed burns – using low-intensity fire to prevent high-intensity catastrophic fire – through her day job.

Patients Complain Some Obesity Care Startups Offer Pills, and Not Much Else