JOsé Beltrán wakes up at 4.45am, has a cup of coffee and lets his dog out before heading to the hospital for his 6.30am shift. For the next 12 hours, he works as a certified nursing assistant in a Covid unit, helping patients who are on mechanical ventilation. When he gets home, he has a couple of hours before bedtime – time he’ll spend having dinner with his family, then hitting the books as he studies to get into nursing school himself.

It’s a grueling routine: last week alone, he was scheduled to work 57.5 hours at the hospital. The job can be harrowing and requires absolute focus: when there’s a code blue, a patient needs resuscitation and it’s up to Beltrán to help save a life. “It’s the highest thrill in my field,” he says. “It’s a privilege to be able to do that. I couldn’t do it if I didn’t love it.”

But in the past year, things have gotten tougher.

Beltrán lives in Phoenix, Arizona, which in August saw inflation hit 13% over the preceding 12 months, according to the Bureau of Labor Statistics – a record for any US city over the past two decades. Nationally, the figure was 8.3%. Gas prices were up 33.5% in the area versus 26.2% across the US. Economists have pointed to the surging housing costs and rapid post-lockdown job growth as key drivers of inflation in the Phoenix region – among the fastest-growing in the country – where the average household devotes 34% of its budget to housing.

Beltrán and his wife, a full-time administrative assistant, have felt the soaring prices at the gas station and the grocery store. A gallon of milk cost $1.98 in the city in 2018; at Beltran’s local supermarket, it’s now $3.49.

Adding to the hardship is the fact that Beltrán’s hospital work depends on the number of patients who need care – on any given day, he could get a 4.30am text informing him that his shift is canceled. “If I don’t make full-time hours, I might be in a bind by the end of the month,” he says. “Those days of working one job and sustaining a household on one income – those days are long gone.”

As prices have gone up, Beltrán has taken on even more work to make ends meet: on top of his hospital hours, last year he began taking shifts for two other healthcare agencies, sometimes pushing his weekly working hours to 65. And he’s not alone in his field; he says he doesn’t know of a nursing assistant on his floor who doesn’t have to work two jobs. 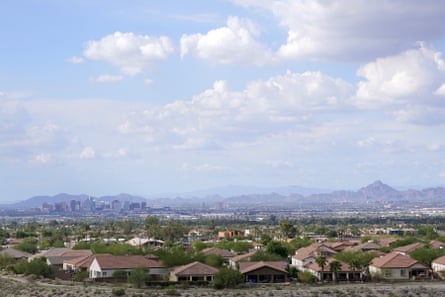 Beltrán, 34, is a warm, soft-spoken host in his tidy living room, where a test-prep book for nursing school is a constant presence on the table and his dog, Bambi, is a constant presence under it. Still in his scrubs after a long day, he describes growing up in San Diego and moving to Phoenix in 2015, when he was “in search of a place or a state where I could afford to live by myself,” he says. “Now in 2022, we’re slowly leveling to that cost of living where I came from.”

Many in the Phoenix area can identify with Beltrán’s plight.

At Matthew’s Crossing, a food pantry in nearby Chandler, adults and their children check in at a window and receive a brightly colored card with a large number, which they display on their cars in the baking Phoenix heat. Inside, cheerful volunteers inspect food donations and assemble packages. Then they emerge to greet the waiting families, with a dolly full of food and other supplies.

More and more people working with full-time jobs are struggling to put food on the table. According to Jan Terhune, the executive director of Matthew’s Crossing, “well over 50%” of the site’s clients worked full-time as of a year and a half ago,” the last time they conducted a review. Now, “I don’t think it would be a stretch to say it’s upwards of 60%,” she says.

Ten per cent of those who visit each month are typically new clients. But these days, it’s more than 20%, Terhune says. “The majority of those new clients will share with you that they never thought they’d ever see themselves having to ask others for help.”

‘I’m trying to live for now’

Stephanie Cudjo, 40, hopes to shield her children from that experience.

Seated outside her office on a lunch break this month, Cudjo has a broad smile and an easy composure. But like Beltrán, Cudjo has found that a single, full-time job isn’t enough to support her daughter and son, who are now 16 and 11. After her day job at a law firm, where she often works more than 90 hours in a two-week pay period, she’ll run errands, cook, and help her kids with their homework. In the late evenings, she goes online to her second job, doing clerical work for a multinational company. “My son says, ‘Mom, you come home and you just go back to work again.’ I go, ‘Well, how are we gonna survive?’”

Cudjo, whose mother died when she was 11 and whose father was largely absent, spent her early years moving between caretakers and battling for basic needs. “A lot of [my] childhood was on the streets, homeless, losing apartments, living in hotels, not knowing where we were gonna get food,” she says of herself and her brother.

Cudjo’s young adulthood was marked by a battle with cancer that forced her to move to Phoenix eight years ago. Her illness meant that her children might have been placed in foster care had she not moved closer to family. Arriving with no job, she and her kids bounced from place to place until she found low-income housing and work as a legal support clerk at the firm in downtown Phoenix – a job she loves. 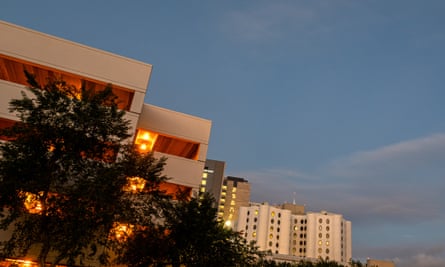 Economists have pointed to surging housing costs as a key driver of inflation in Phoenix. Photographer: Ash Ponders

Her housing situation remains uncertain: “My fear is to be homeless again. Jumping here and there, living out of your car – that’s my fear,” she says.

Through it all, Cudjo remains upbeat. “I’ve overcome a lot. I’m learning from the struggles I went through,” she says. “As long as I’m working and I can provide for the children and have a roof over our head, that’s all I want. I don’t try to think bigger, better. I’m trying to live for now.”

Beltran echoes those sentiments. Having grown up in federally subsidized housing, he now has his own place and a job in healthcare – a goal he’s had since childhood, when he learned to help his grandmother manage her diabetes. He’s worked in the industry for 12 years: “What keeps me here is the fact that you learn something new every day.”

He adores Phoenix: “If it was up to me, I wouldn’t leave,” he says on a trip to the local supermarket. But he has considered moving once again in search of a lower cost of living. Pointing to staples like bread, eggs and cheese, Beltrán reflects on surging prices. “Essentially, we plan to pay double now” for groceries, he says. “You figure out what your needs are rather than what your wants are.”

As we enter another aisle, an older man passes on his way to the checkout area. Perhaps seeing Beltrán’s scrubs, he says out of the blue: “Have a blessed night.” Beltran has never met him.

“Today was literally a 13-hour day,” Beltrán says afterwards. “That kind of comment makes it all worth it.”