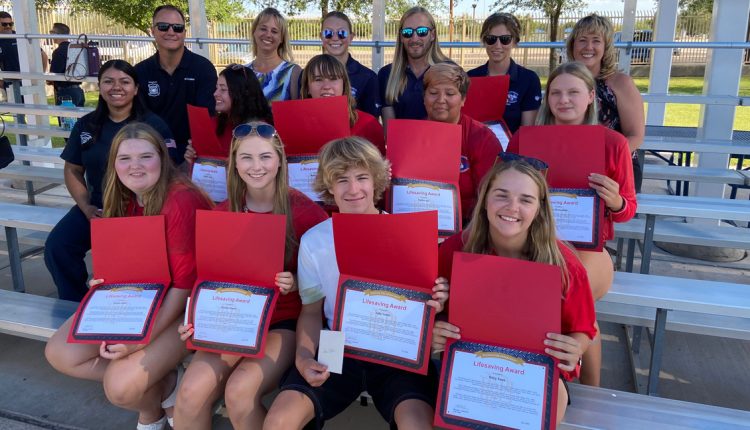 PHOENIX — A typical day at the pool quickly turned into an emergency situation after a man crashed his car into a pole just outside the Deer Valley Public Pool in Phoenix last month.

Upon hearing the crash off of 19th Avenue and Utopia, a group of young lifeguards evacuated the pool and darted across the street to help.

“Three of us didn’t have shoes on because we were in the deep end in the pool,” 20-year-old Natalie Stahl recalled of the crash. “Because your adrenaline is pumping, I didn’t even feel the hot pavement walking over or getting any of the glass in my feet.”

“I was applying pressure to his head because he was bleeding a lot,” 18-year-old Itzianahi Toyos remembered from the crash. “I was using, kind of like, my elbows and my knee to apply pressure with the gauze to make sure he had that support.”

Stahl, Toyos and their peers used the pool’s atrial defibrillator to shock the man who remained unconscious as they awaited paramedics.

“We continued to do CPR,” Stahl said. “I was timing it, so we did CPR for three minutes until EMS arrived.”

When the Phoenix Fire Department arrived at the crash, they were surprised to see so many young people working together to save the man.

“This is very atypical,” Troy Campbell, former lifeguard turned Phoenix firefighter, said. “There was like a dozen lifeguards standing around in a circle, helped them didn’t have shoes on, and they’re doing compressions and helping.”

He said the young team did everything right.

“They gave him the best odds possible by early intervention with the [atrial defibrillator] and compressions,” Campbell explained. “That’s the best thing they could have done for him and it gave him better odds for survival.”

It’s not yet known what caused the crash, but authorities said the man involved was breathing on his own and in stable condition two days after the incident.

Becky Kirk, aquatic supervisor for the city of Phoenix, said she’s grateful that these young people felt confident enough in their training to jump into action so quickly.

“It’s definitely a proud moment,” she beamed. “We are very lucky to have the people working for us that work for us. They’re here every day. They jump in wherever they’re needed. If we need assistance, they’re here to help, so we’re very fortunate to have the team we have.”

While this was far from what these lifeguards signed up for, they feel grateful they could be there to help not just the man injured but each other.

“Our team is really great, we all get along very well,” Toyos said. “Honestly, I wouldn’t want any other team and if it was [a different team]I think it would have gone a little differently.”