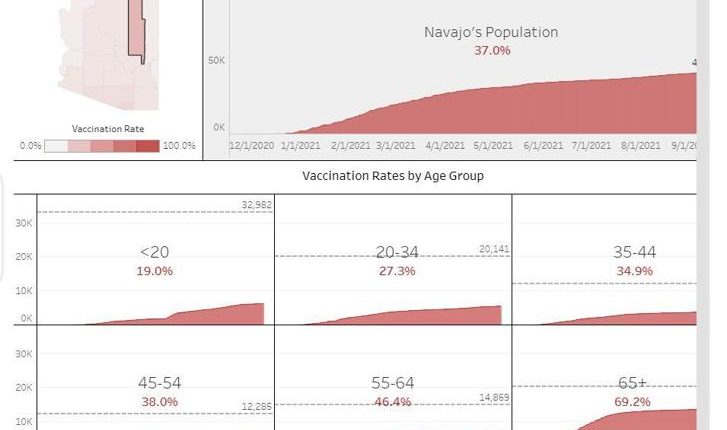 And so goes the pandemic.

Pfizer announced this week that data it has submitted to the U.S. Food and Drug Administration shows that its COVID-19 vaccine elicits a strong immune response with only fleeting side effects in children ages 5-11. This could lead to the vaccine being approved for younger children by the end of October.

On the flip side, a new poll this week shows that despite the spike in new cases and deaths from the Delta variant – about 20% of Arizona residents say they have no intention of getting the vaccine.

The news comes amid signs that the recent spike in cases in Arizona has at least reached a plateau, with Navajo and Apache counties both seeing encouraging declines.

In Navajo County, cases have increased 2% daily average over the past two weeks. However, the county’s infection rate of 38 per 100,000 is only slightly above the national average of 35 per 100,000. Even so, the county still reports an average of about 30 new cases per day and one death. Around 60% of the county’s residents are fully vaccinated – but this mainly reflects the high vaccination rates in the reservations. In southern Navajo County, only about a third are fully vaccinated.

Apache County is doing better thanks to a higher vaccination rate nationwide. For the past two weeks, Apache County has reported a daily average infection rate of 26 per 100,000 – well below the national average. The daily average has decreased by 56% in the last two weeks. Here, too, the reserves have much higher vaccination rates and much lower infection rates than in the southern district – where only about a third of the residents are fully vaccinated.

Nationwide, the increase in new infections fell by 17%. The overwhelming majority of new infections were the unvaccinated and almost all deaths and serious illnesses.

The latest news on the vaccine’s safety and effectiveness in children offers renewed hope for a return to normal in schools where students have suffered months of learning disabilities due to distance learning and school closings. Children account for about one in five new infections nationwide, a far higher percentage than in previous increases. About 30,000 children were hospitalized with COVID-19 across the country in August, and doctors fear the recent increase in children could suffer from the rare but potentially fatal multisystem inflammatory syndrome months after recovering from the initial infection.

The Pfizer data – not yet published or peer reviewed – compared the effects of the syringes on 2,268 children aged 5 to 11 years with the effects of a placebo syringe on a similar number of children. Not enough children were infected to calculate the syringe’s ability to prevent infection. However, the children who received the vaccine produced a strong immune response – meaning they would likely receive the same protection as adults – in whom the vaccine prevented 95% of infections. The children in the study had only mild and fleeting side effects – including fever, flu-like symptoms, fatigue, and sore muscles at the injection site.

The younger children reacted to the injection in a similar way to the adolescents between the ages of 12 and 18, who were also approved for the injection. It will take months of additional data collection before approval for children moves from “emergency use” to regular use. At this point, schools could mandate the vaccinations, just like other vaccines for children.

The children received about a third of the adult dose due to their lower body mass.

However, the positive results of the vaccine in Arizona children have been partially overshadowed by news that a solid 20% of Arizona adults say they do not plan on getting the vaccine despite the rebound in cases. Republicans were far more likely than Democrats or Independents to turn down the shot, according to the results of the OH Predictive Insights poll. Fortunately, 70% either already got the chance or say they are ready. Combined with the number of people who have recovered from infection, vaccination of 70% of the population would likely allow the state to achieve herd immunity protection – if that means new cases stutter and die out, rather than another Cause increase.

The survey of 1,000 Arizona residents was conducted between September 7th and September 20th and has an error rate of approximately 3% in either direction.

Around 46% of residents say they are very or moderately concerned about the pandemic and around 35% say they are slightly or not at all concerned. Unfortunately, the least affected are also the most likely to refuse the vaccination, although almost all hospital admissions and deaths are now among the unvaccinated.

Only around 52% of respondents believe the pandemic will get better in the next 30 days, a sharp surge in pessimism over the past six months.

Interestingly, 48% of Arizona residents approve of Governor Doug Ducey’s handling of the pandemic – although half oppose the governor’s ban on mask mandates in schools and 57% oppose his threat to withhold money from schools that impose mask mandates.

“Most respondents, especially those without children, believe that schools should have the power to decide whether students wear masks,” the poll concluded. “The strongest belief that schools should make decisions about masking requirements are found among Democrats (80%), Hispanic adults (68%), postgraduates (68%), and Pima County residents (67%). Republicans (68%) and rural counties (59%) are most likely to feel that parents should make decisions about masking requirements. Three quarters (72%) of those who would not take the vaccine also believe that the decision whether students wear masks should be left to their parents. “

It turns out that Democratic President Joe Biden has taken an even bigger job admission hit than Ducey in dealing with the pandemic – with a negative net rating of -4%. Six months ago, Biden enjoyed a 32% net approval rate – with the promise that a mass vaccination program will hit the headlines and that the delta increase is still in the future.