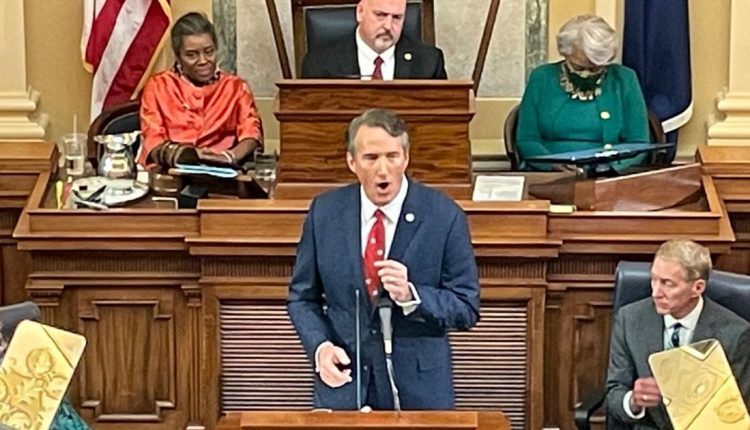 In contrast, Youngkin said he would ban any attempts to repeal the state’s right-to-work policy, which allows workers to choose not to pay union dues at their workplace.

“If anyone tries to bring me a bill that creates forced unionization, that will serve the business purpose of my veto pen,” he said.

Democrats were mostly silent, sitting at their desks during Youngkin’s speech, while Republicans gave a standing ovation.

Democrats applauded when Youngkin urged all Virginians to get vaccinated and get booster shots, though he said he would never make it mandatory for any Virginian, including health care workers, which Democrats have strongly criticized.

“If I speak to you as governor, I will never tell you what to do,” Youngkin said. “But speaking to you as a friend and neighbor, I strongly encourage you to get vaccinated.”

Democratic senators who have the votes to block Youngkin’s agenda if they want — and if they don’t have defectors — gathered in the Capitol rotunda after his speech and said they didn’t like what they heard.

“What we heard was a lot of doom and gloom, like nothing had happened in the last four years. Virginia has always been open to business,” said Sen. Mamie Locke, D-Hampton, the caucus chair.

Chance of light rain in Phoenix on Tuesday, followed by higher than normal temperatures