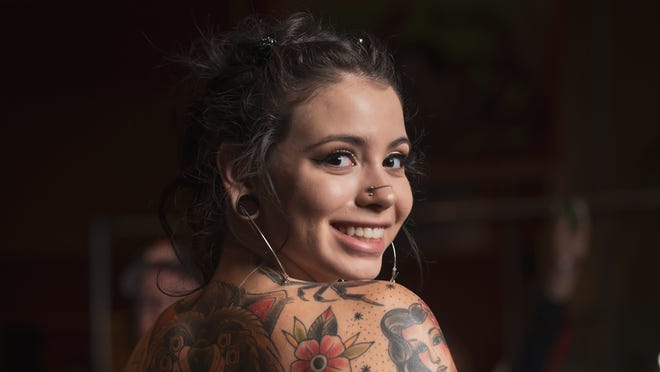 Your guide to the Hell City Tattoo Festival 2022 in Phoenix

People have used tattoos throughout history to share information about themselves. Today, tattoos often have very personal meanings. They can show a person’s affiliation with a group, love for another person, cultural heritage or interest in a certain topic.

The Hell City Tattoo Festival celebrates the art of tattooing with three days of inking, tattoo- and art-themed vendors and live art activities. It’s Aug. 26-28 at the Arizona Biltmore in Phoenix.

Hell City is celebrating its 20th anniversary this year. Owner and promoter Durb Morrison puts on two festivals a year, this one and another in Columbus, Ohio. The Phoenix show started in 2008.

‘I want to paint tattooing in a positive light’

Morrison, a professional tattoo artist for 33 years, showcases tattooing as an elevated art form by bringing in over 220 high-caliber artists from Arizona and other parts of the country.

The festival often attracts first-timers who have never been to a tattoo event or don’t have tattoos.

“It’s their chance to come beyond television, come beyond the magazines to experience tattooing live. I want to paint tattooing in a positive light,” Morrison said.

“People who come in, it might be their first experience into the world of tattooing. I want them to see it from a professional industry side. The appearance and presentation of tattooing could make or break how they view tattoos and if they want to get tattoos.”

Attendees can watch the tattoo artists at work.

“You can walk the aisles. You can stand at the artists’ front table where their portfolios are, and you can sit there and watch. You can have conversations with them,” Morrison said.

Mystery Castle and more:5 favorite things to do in south Phoenix

‘There’s so many things you can learn’

Tattoo artists frequently try to learn from watching other artists.

“Tattooing is a very visual art form. Even the application is very visual on how to dip into your ink or wipe the skin. There’s so many things that you can learn,” Morrison said.

Many of the tattooers make a vacation out of it, spending a few days or a week at the hotel. Each night, the hotel has pool parties filled with artists and tattoo enthusiasts.

“I want to give them an experience they’re not going to get at other shows,” Morrison says.

Morrison started attending tattoo festivals at age 18. His experiences gave him insight on how to run his own festival.

“I’m not just some yahoo trying to make money off tattooing. I’ve actually dedicated my life to tattooing,” Morrison said. “To me, it’s a huge thing. A lot of artists don’t like to see people making money off the industry who haven’t dedicated at least a decade to tattooing.”

What to expect at Hell City Tattoo Festival

The festival’s tattoo competitions draw large audiences and pools of contestants. Some categories get up to 70 entrants.

The tattoo of the day category highlights tattoos that were created on site by artists at the festival.

Five to nine judges determine the winners, who are announced right after each category. Morrison says winning is special because of the personal connection people have with their tattoos.

“When people win the awards, it brings a whole new appreciation for not just the artists but for the tattoos,” Morrison said.

The event will showcase the tattoo artists’ talents in other ways as well.

As part of the Wet Paint Project, around 30 local and out-of-state tattoo artists will paint live. Their pieces will be available for purchase.

The Art Fusion Experiment is a collaborative effort in which three to five artists will work together on different canvases, switching every three to five minutes.

These pieces will be sold in a charity auction benefiting children’s education. Artists’ work also will be on display throughout the ballroom.

More:How an Apache per skater and Tony Hawk’s foundation are bringing a skate park to Arizona

The main stage will have burlesque performances from Maxi Millions and Cervena Fox and a circus sideshow act from husband-and-wife team Captain and Maybelle.

Body modification artist Steve Haworth will also give a special performance on Saturday.

“We are seeing so many styles nowadays with tattoos. It’s impressive stuff you thought couldn’t be done 20 years ago on skin,” Morrison says.