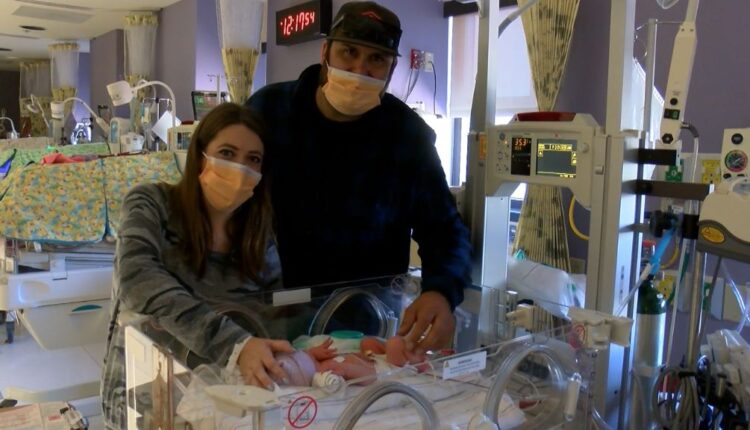 Gordon Brett Jaggi was born at 12:43am Sunday, January 1st. He is the first baby born in Yuma County this year.

Overall, the tiny tot measured in at 18 inches, and weighed 4.5 pounds. However, Gordon was the name of choice on such short notice.

“We were out at Gordon’s Wells, and we didn’t have a name. So, it sounded right. We were looking for an old-fashioned name; Gordon’s kind of strong, so we all went with Gordon,” said happy father Chris Jaggi .

Gordon’s parents, Chris and Val, reside in Campo, California. The couple were in Yuma on vacation in the Imperial Sand Dunes. That was when Val noticed she may be going into labor on December 29th.

Both Chris and Val wanted the birth of their baby to occur on a special occasion.

“We wanted to be the first one, and then the nurses came. So, I was kind of eager to win the race,” Chris continued.

Val described her surprise and joy when the first signs began.

“I was just waking up and all the sudden I was [thinking] I’m going into labor. Then, I woke him up and said ‘I think we’ve got to go to the hospital,'” said the happy mom.

The emotions were running high once Val cradled her newborn baby boy in her arms.

“I just wanted to cry, I was so excited. I felt so blessed,” Val expressed.

The family of the 2022 New Year’s baby, Diandra and Richard Martinez, and their now 1-year-old daughter Kaylee, presented gifts to the Jaggis.

As of now, the Jaggis will remain in the hospital with their newborn for the rest of New Year’s Day.