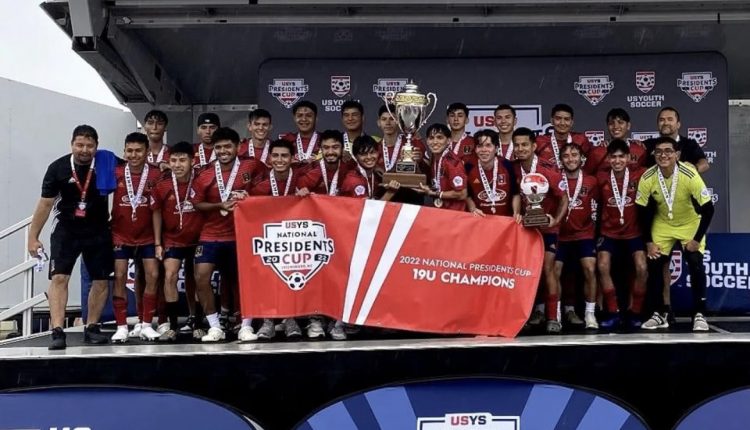 RSL AZ 03 Quintana is bringing home the gold after getting a second chance to play in the National Championship.

GREENSBORO, NC (KYMA, KECY) – The Yuma 19U RSL AZ 03 Quintana soccer club team did what no other Yuma soccer team has ever done.

They made is to the highest competitive level there is and won the US Youth Soccer National President’s Cup Championship Sunday.

They defeated Illinois 4-0, who they actually lost to on Saturday in what was supposed to be a win or tie for Yuma in order to make it to the Championship. Yuma lost 2-1, but got lucky and still advanced due to Virginia’s loss.

That set up a rematch for Yuma and Illinois and Yuma came in hot.

According to Christian Perez, Yuma’s center defensive midfielder and Mario Rodriguez, left defender, going into today’s game they knew they needed to fix the mistakes they made in Saturday’s game in order to win.

They said they needed to communicate more, not let the team get into their head and play their own game.

They succeeded. Erick Mejia scored three goals and Hector Gutierrez scored the fourth. Two goals were made in the first half and two in the second, just dominating the game.

Perez says it still feels unreal but they always believed in themselves.

“I think what stood out to us is knowing that we were able to make it this far. A lot of people doubted us from Yuma, we’re small, not all a lot of people know us,” said Perez. “A lot of people said you have it easy, an easy ticket to the final but we just proved everyone wrong and we did that today also, it’s just a great feeling.”

Yuma’s goalie Agustin Preciado says his team came out and did what they had to do to take home the gold.

“We did our jobs. We came with that mentality of winning and we took it home,” says Preciado. “We claimed the trophy, back to Yuma.”

Preciado is also taking home the Golden Glove Award, which is given to the keeper who was scored on the least. Preciado only allowed four goals throughout the whole tournament.

Rodriguez says it was a team achievement and everyone played their part.

“We’re just proud of ourselves to just put Yuma out there on the map, like as a soccer city cause we’ve never got that recognition in the past,” Rodriguez said.

Coach Jerry Quinatana and the team would like to thank the community and support they have received from Yuma.

“The community has been great and the amount of support we’ve been receiving, you know people posting on our social media, people sending us messages from back home and the support has been overwhelming,” says Quintana. “Just getting here, raising enough funds in less than three weeks was probably more difficult than actually going out there and practicing for two hours a day. So we’re super excited and super thankful for everybody back home that helped us.”