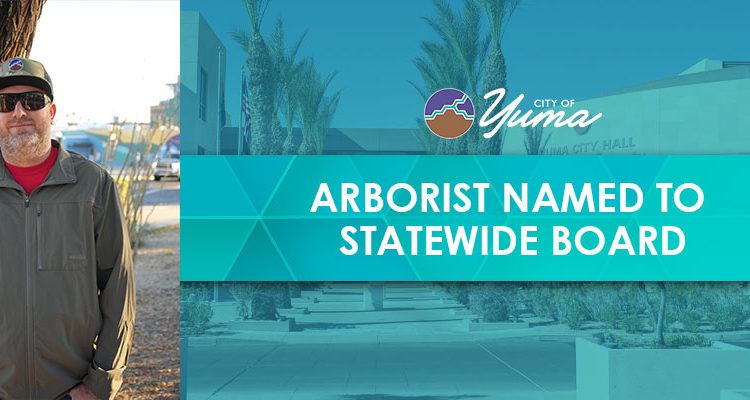 Yuma Arborist Named to Statewide Board

The ACTC is an education and tree community-building nonprofit organization dedicated to the proper care and planting of Arizona trees. It does this through professional training, public education and awareness, partnerships that advance their vision and mission, and through advisory support for the state forester. ACTC has served this function for more than 30 years. Its members span across the public and private sectors.

Matlock’s board position will strengthen partnerships and facilitate the exchange of information regarding all aspects of forestry with the city’s federal, state, municipal, and nonprofit partners. The goal is to elevate professional standards for tree care not just in the Yuma area, but statewide. This seat will also assist in the expansion of the urban tree canopy within the county.

“I was equally as nervous as I was excited to find out I was chosen,” Matlock said. “I’m looking forward to advancing more educational opportunities for tree care in our area.”

The City of Yuma is the only city in Yuma County designated as a Tree City USA with the Arbor Day Foundation. Matlock’s local connection through the ACTC would facilitate other Yuma County cities to move toward the Tree City USA designation.

Matlock was one of three new ACTC members chosen. His term begins immediately.

“I want to congratulate Espy Matlock on becoming an ACTC board member,” said Parks Manager Jay Jarrett. “This is a big deal for not only the City of Yuma but for Yuma County. Espy continues to be a great Parks and Forestry visionary who not only thinks about our current needs but looks at what we can do to usher in our new generation.”

Matlock has worked with the ACTC organization since 2005. He has been a certified arborist since 2013 and is currently working toward his municipal arborist certification.

Family of 5 found dead in their Phoenix home included attorney, her twin infants and 3-year-old son