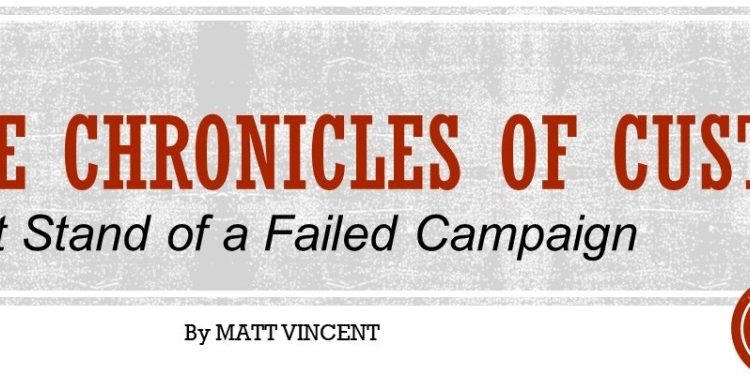 Any American with any sense of history knows that, on June 25, 1876, the US Army suffered one of its worst defeats at the hands of a superior Native American force. Ignominiously known as “Custer’s last stand,” the Battle of Little Bighorn was a humiliation for the Army’s Seventh Cavalry and has left many wondering how Col. George Armstrong Custer – a highly successful cavalry commander during the American Civil War – could have been so poorly prepared to meet the Lakota and Cheyenne warriors they went looking for.

In his latest book “The Chronicles of Custer: First Stand of a Failed Campaign,” Yuma, Colo., author Matt Vincent presents in painful detail the utter ineptitude of the Army, and especially Custer, in fighting the Plains Indians.

Vincent’s book focuses on a part of Custer’s life and career that most thumbnail histories gloss over, Major General Winfield Scott Hancock’s disastrous expedition against the Cheyenne in 1867. Reading this book, it becomes clear that Custer was not alone in misunderstanding or just plain ignoring intelligence about the original inhabitants of the High Plains. Hancock was a verified war hero during the Civil War, but blundered badly in his handling of the Plains Indians during his expedition. Federal policies that saw Native Americans as less than fully-realized human beings didn’t help any; Racist policies promulgated in Washington, DC led to brutality against the western tribes from Sand Creek to Summit Springs.

Vincent chronicles Custer’s repeated violations of military protocol and human decency in incident after incident. Custer groused that Scott insisted a well-equipped baggage train accompany Custer during a foray along the Republican River, yet he penned his complaints in the relative luxury of a military tent while sitting at a portable writing desk hauled in said baggage train.

On more than one occasion, Custer abandoned his command to hunt wildlife, and schemed to leave the field in order to spend time with his wife. By the time he is brought up to face multiple charges in a court martial, the reader has to wonder, “What took them so long?”

Custer was convicted of roughly half of the charges brought against him but suffered the proverbial slap on the wrist. Less than a year later he was back in the saddle and attacking otherwise peaceful Cheyenne and Lakota villages in Kansas and Colorado, working his way inevitably toward his own bloody end in Montana Territory.

Vincent makes no secret of his disdain for Custer, whom he portrays as vain, egotistical and narcissistic, and his portrayal is solidly based on scholarship. The bibliography of nearly 60 entries lists works by such noted Plains Indian scholars as Jeff Broome, Dee Brown and George Bird Grinnell, among others.

Presented in a compelling narrative reminiscent of Shelby Foote’s “Civil War” trilogy, “Chronicles” is an easy read stuffed with detail. Ever the consummate journalist and gifted storyteller, Vincent writes about Custer as if he’d been alongside the doomed man on a wild, and completely unnecessary, chase across the prairie after antelope and bison.

As with his first book, “Wild Times and True Tales from the High Plains,” “Custer” is illustrated by Akron artist Brigette Shafer. Shafer’s renditions of photographs and other images of historic figures lends a rugged authenticity to the book.

Vincent will be in Sterling for a book signing at Overland Trail Museum on Wednesday, Nov. 30. The event will begin at 10:30 am

Pedestrian dies from injuries after hit by car in Tucson