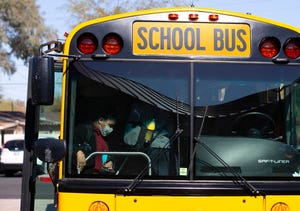 The driver was identified as 41-year-old Nona Scott, according to a press release from the Yuma Police Department.

Police responded to a call about suspicious activity with a school bus in the private parking lot of the Vincent Nelson Apartments shortly before 4:30 p.m. on September 23.

An investigation found that the bus driver stepped on the brakes while crossing the parking lot and threw most of the students forward onto the seat in front of them.

Of the 44 students who were on board at the time, 21 reported injuries, the statement said.

The bus driver first informed the police that something had leaked in front of the bus, which caused them to brake. After further interviews and investigations, police said they believe the hard braking was intentional, the press release said.

According to Yuma Police, Scott has been arrested and detained on 44 exposures, 21 bodily harm and 1 hoax.

You can reach reporter Caroleina Hassett at [email protected] or on Twitter @lena_hassett.