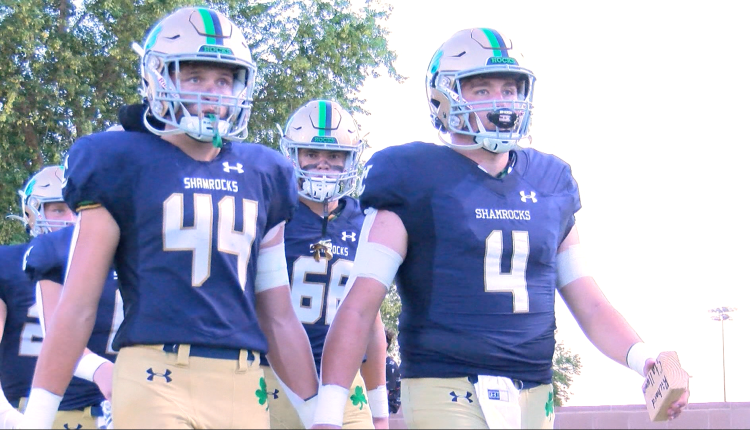 YUMA, Ariz., (KYMA, KECY) – Not one, but two potential records will be on the line Friday night at Ricky Gwynn stadium on the campus of Yuma Catholic High School.

At the center of it all is the Shamrock quarterback, Richard Stallworth.

Stallworth grew up in the Yuma Catholic football program with eyes on the prize from an early age – looking up to some of the greats that have battered the record books and captured state titles for the Shamrocks with his father, Rhett, as the head coach.

The young Shamrock not only learned some valuable lessons being around some of his idols, but he created a winning mindset in the process – beginning a football career that started well before he entered high school.

Now in his senior season, Stallworth sits just two passing touchdowns away from breaking the AIA state record for touchdown passes in a career. The magic number being 138.

Stallworth broke onto the scene in 2020 as a sophomore, throwing for 49 touchdowns and 3,803 yards before posting an astonishing 67 touchdowns and 4,863 passing yards in 2021 – both passing and touchdowns in 2021 good for the single-season record in the state.

But instead of taking all of the credit, the senior points to everyone around him within Shamrock football family for his success.

“It’s definitely the receivers and the o-line. Without that o-line, I don’t get the ball out and those receivers really come down with catches whether they are great balls or not a great ball and they go and make a play ,” said Stallworth. “Coaches are also always picking me up with play calling and all this stuff to get me ready through practices. It’s a whole team thing, not just me.”

For Stallworth, the record book is not driven by individual praise but one that steers the whole team and program to succeed towards a championship and recognition.

When asked about the pressure of being the quarterback of Yuma Catholic, Stallworth said he loves taking on that role and making sure he lives up to it – but in the end, it’s about the team and how a record like this would be a win for the entire program.

“I don’t even talk about records. I don’t care if we run the ball. I don’t care if we throw the ball,” said Stallworth. “They know I’m with them no matter what. People can say what they want in the stands but the team knows deep down I don’t talk about records. If I get them, I get them. If I do, it’s their record too. If I could put the Yuma Catholic Shamrocks on that record too, I would. Not just me.”

Stallworth will get a shot at the touchdown record Friday night at Ricky Gwynn Stadium in a meeting with Buckeye. The Rocks looking to bounce back from their first loss of the year.

But it’s not only the touchdown record in reach either.

With over 1,500 yards so far this season, Stallworth now stands fifth in the state in career passing yards – needing just 392 yards to once again surpass his fellow Shamrock predecessor Gage Reese to hold yet another school record.

By the end of the season, Stallworth could break the state passing record with less than 800 yards to go.

Phoenix hang on by talons for big result, 2-1 – News-Herald