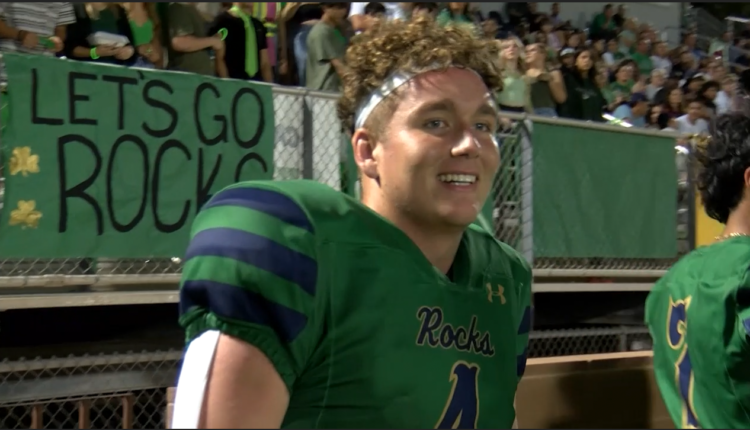 YUMA, Ariz., (KYMA, KECY) – For the second straight season, Richard Stallworth made his presence known as hands-down the best quarterback in the area – with broken records even making an argument as the best in the state of Arizona.

Growing up in the Yuma Catholic culture with his father at the helm, greatness was cast down to Stallworth from a young age. After being accustomed into the “Shamrock Way,” it was his goal to follow and surpass the groundwork laid down by the players that came before him.

After coming onto the scene as the starting quarterback in his sophomore season, Stallworth surged into the spotlight as a junior like lightning out of a bottle.

While leading the Rocks to another state title appearance in 2021, his stats stood next to some of the best that have ever played in the state – throwing for a record-setting 4,863 yards and 67 touchdowns. Both of those good for single-season records in the state.

Fast forward to 2022, the script was already written for Stallworth to continue his run and etch his name in career passing records – not only for the school but for the state.

Six games in to his senior campaign, Stallworth took one step towards Arizona high school football lore – tossing a shovel pass to Jarred Marquez who took it 80 yards to the house to break the all-time passing touchdown passes record at 138. The record passing Sunrise Mountain’s Chase Cord from 2013-2016.

Stallworth eventually crushing both of those numbers by the end of his run – amassing a total of 12,590 passing yards and 168 touchdowns.

Holiday travel? No scheduled closures on Arizona highways, but still cause to drive carefully