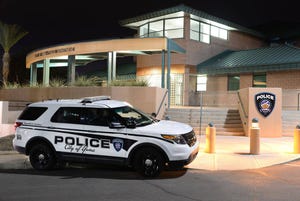 A Yuma man who works as a high school football coach and as an elementary teacher was arrested last week on suspicion of sexual exploitation of a minor.

Jacob Williams, 31, was arrested Thursday morning on charges of aggravated luring a minor for sexual exploitation. Williams is a junior varsity football coach at Yuma High School and a teacher at Tierra Del Sol Elementary in Somerton, according to police.

On the morning of Oct. 2, Williams began a conversation on social media with a girl he believed to be 17 years old, said the police in a press release.

During the online conversation, Williams is accused of trying to solicit nude photos numerous times from the person he was communicating with, according to police.

He also allegedly sent a nude photo of himself to that person.

According to the Yuma Daily News, Somerton School District officials released a statement that said, “Based on the information we received, this incident did not occur on our campus or district. However, the safety of our staff and students are of utmost priority and proper measures were taken. The corresponding authorities are conducting their investigation.”

This type of crime is a class two felony punishable by up to 12.5 years in state prison if convicted, according to Arizona state law.