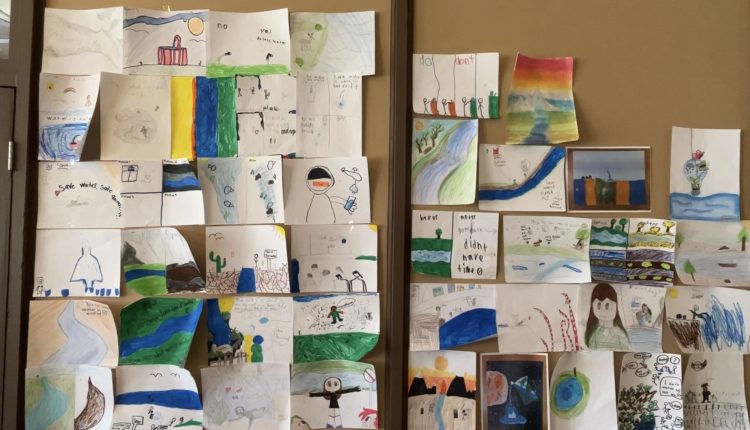 YUMA, Ariz. (KYMA, KECY) – Yuma Crossing National Heritage Area held a water conservation art contest to bring awareness to the endangerment of the Colorado River and Saturday was the first day those pieces were showcased in an art walk.

Yuma Crossing received over 340 submissions. There were four different age groups with three winners in each.

Sarah Halligan, Yuma Crossing Marketing and Communications Specialist, says she thought the art contest would be a great way for kids to be involved and if they start making differences now, the changes in the future will be major.

“You come to this park specifically you can see the difference between what the river once was compared to what it is now and the fact that it is the most endangered river in the United States, possibly the world, we need to make a difference, says Halligan. “And if we don’t do it now, we’re going to run out of water resources.”

Halligan says it was great to see the creativity come to life in the art work and Arizona Western College student, Seanna Jo Engel really thought outside of the box.

Engel, one of the 19 and older division winners says water conservation is important because water is the source of all life and we need to work on better ways of using and preserving it.

“My piece was dedicated to water catchments that supply wildlife with their water and the old design used to be incredibly obtrusive. Everything was above ground and so they’d have these really huge catch aprons which was just huge cement slabs that had the water, which led down into above ground tanks and so they used to have to helicopter or carry the water in from the Colorado River by trucks or helicopters into the water catchments which then led down into the tanks,” Engel explains. “And these tanks, like I said, are above water and even with the equally obtrusive shades they built, water evaporated, so they ended up losing a good amount of water and then it scared wildlife away because there was so much activity and it was just above ground, obtrusive human made.”

Engel goes on to explain how the problem can be fixed.

“So John Hervert made a new model which is gravity driven and all under water and so there’s no evaporation because the holding tank is under water and everything comes from natural water sources like washes and such. So it all comes from the wash, gravity pulls it down into the holding tank and then down into the where the animals feed off the water,” Engel continues. “So there’s no water loss and the animals have no idea what’s going on. It’s just a natural source of water to them.”

She says this is a much better solution for the animals and to save water.

Halligan says what she found unique from the artwork is the children ages from two to eight years old, majority of them five to eight, are understanding how to save water within their homes.

“Just seeing how they, ye know, within their homes of turning the water off when they’re brushing their teeth, taking shorter showers,” says Halligan. “Those little things may not seem like a lot, but those actually make the difference and the fact that these five to eight year olds actually see that or notice that is huge. So it’s already making an impact on their life.”

Yuma Crossing will showcase the art pieces until Sept. 3rd.

One dead, one hospitalized after motorcycle, pickup truck crash in north Phoenix