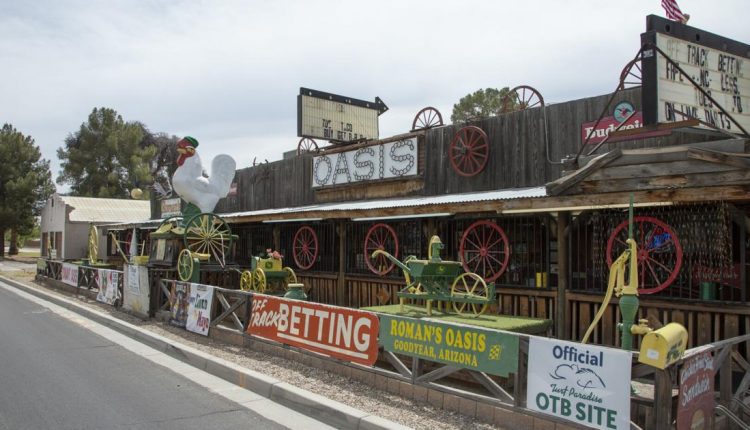 A West Valley staple, Roman’s Oasis is set to move to accommodate the expansion of Yuma Road.

“I do have apprehensions,” said Myra Curtis, owner of Roman’s Oasis.

“I’m pretty sure I will until we get into the new building. I’ve had five years to get used to it because soon after I purchased the bar, it became known that we were going to be moving at some point because of the roadway.

“I’ve had all these years to formulate a plan and convey that to everyone and really make sure that I’m prepared to move Roman’s forward in the same manner that it is here and ensure that the historic value stays.”

Curtis said although it’s disheartening, the move has left her optimistic.

“If we were to stay and they widened the road, our rooster right out front may or may not be in the right of way,” Curtis said. “We would not want to have the roadway right up next to the building. It would just be unsafe, and I will not allow that. So, we are forced to move, but the city has been incredibly supportive and positive about Roman’s remaining a part of this project, which is incredible.”

Curtis took over the business in 2015, four years after her father, Roman Comer, died. Roman’s wife, Karen, owned the bar during the four-year gap. Curtis’ daughter Sarah, 36, is a manager and will eventually become owner.

The 9,000-square-foot bar will relocate to the land just southeast of where it stands, following the building’s demolition.

Roman’s guests can help decorate the new bar to create a similar interior.

“I’m trying to help settle their fears,” Curtis said. “I’m going to give them a chance to pick a section, or an entire corner, take everything down off the wall so that when we get over to the new building, it will be very similar. They will be able to put things back in a familiar place for them.”

The new location will have a similar size, setup and layout.

“We will still have three or four distinctive areas. It might just be a little bit of a different footprint,” Curtis said. “There will also be some new elements that are inviting.”

“It’s amazing. It’s like a community, and I’ve always said that this is like a community center,” she said. “My favorite part of this whole experience has to be the people. It’s just a fantastic place to be.”

Curtis, 61, admitted that despite having been involved in the bar since she turned 19, she never imagined herself taking over the business from her father.

“As a Christian, I never thought the bar would be where I was,” Curtis said. “I grew up in the church, I understood the values ​​of Christianity, and what I see here are the same values, people taking care of people, and that’s why I thrive here. And that’s why my daughter thrives here.”

Sarah, like her mother, started working in the bar with her grandfather at the age of 19.

Demolition is planned toward the end of the year. Curtis said she hopes to continue her father’s success in the new building.

“A legacy of camaraderie,” Curtis said. “I pray that we can continue to be here for people. We serve as a getaway for some people, an escape. It’s such a unique venue, and sure it has its flaws, but it’s still the same friendly, relaxed, welcoming environment that my dad created.”