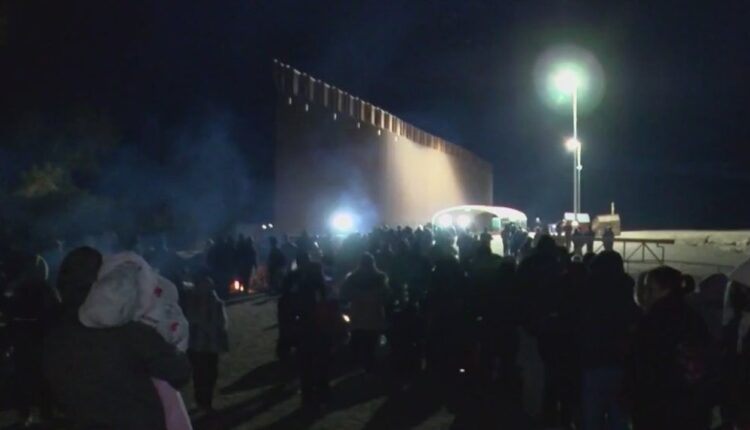 YUMA, Ariz. – A large crowd of immigrant is gathering at the US southern border with Mexico, and they’re all waiting to be processed in Yuma.

Border agents apprehended over 300,000 immigrants over the past year in Yuma alone – that’s more than the population of the country.

The massive group is doing what they can to stay warm as they wait for sometimes hours to be processed.

The chairman of the Yuma County Board of Supervisors declared an emergency due to the ongoing situation, saying part of the reason for the emergency is due to local officials dealing with issues the federal government should be taking care of themselves.

“With the County facing a “triple threat” of COVID-19, Respiratory Syncytial Virus and the flu, and the increasing number of asylum seekers and migrants entering Yuma County from Mexico, local healthcare resources are being stressed,” read the declaration of emergencies.

“I don’t see the response I’d like to see from the federal government,” said chairman Tony Reyes. “We keep insisting this is not a local issue. We keep taking care of the problem when they come around and take pictures.”

According to the most recent update from Yuma’s sector chief, nearly 1,000 migrants are crossing into Yuma daily.

A Trump-era border policy could end soon. This comes as nearly 3,000 undocumented migrants are crossing the El Paso, Texas border each day. FOX’s Ashley Soriano has more as border officials say the number of people crossing is higher than they’ve seen before.

This comes just five days before the planned end of pandemic-related asylum restrictions.

Title 42 was enacted by the Trump administration at the beginning of the COVID-19 pandemic, and the Biden administration has fought to keep it in place for two years.

Now, both Republicans and Democrats are calling for some concrete solutions from the White House.

White House officials say they’ve been preparing for what could be even more migrants on the border.

Biden has never visited the border throughout his presidency, despite the ongoing crisis with record numbers of illegal immigrants crossing the border each month.