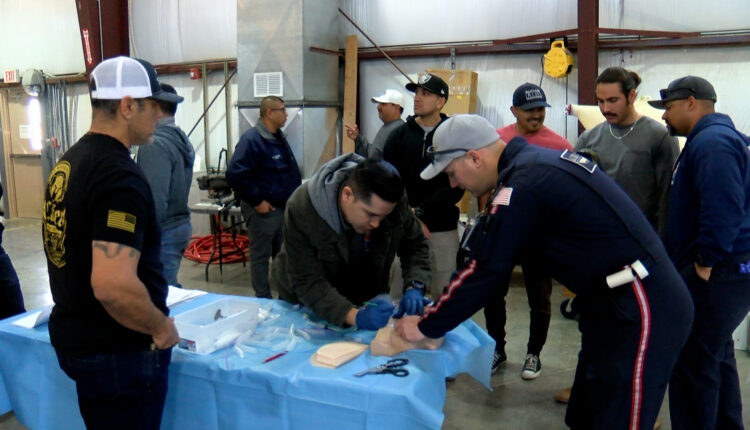 Somerton Cocopah Fire Chief, Javier Hernandez mentioned some of the ways they got their hands dirty.

“We get to practice with mannequins, some chicken bones and all that. Ribs,” Hernandez described. “And it gives paramedics an actual feel on how to do it, kind of if it was like a real person.”

They also had a station called PEEP. It involved hooking up a set of pig lungs to the transport ventilator, showing how important the PEEP procedure is to aid in the oxygenation of an intubated patient.

The agencies are taught how to be effective and efficient with low usage but high-impact skills.

Most of the stations included intubation and airway skills..

The EMS Coordinator, Romeo Barcenas, said this training happens every year so all teams are prepared for these rare calls.

Isiah Quezada, Somerton Cocopah Firefighter, EMT and Arizona Western College paramedic student described how to provide an advanced airway while someone is vomiting.

“You’re placing a tube down the trachea, but what a lot of people don’t know is that there is a lot of blood sometimes from trauma or maybe vomit and you can’t really have a perfect view, so you put a suction catheter in the esophagus and then with your blade, you lift up, put it down the esophagus,” Quezada explained. “You have a clear view at this point and so you clear up all the vomit, clear up all the blood and then you have a perfect vision to put in your tube down the trachea and you can start breathing for your patient.”

Yuma Regional Medical Center EMC Physician Dr. Franco Castro-Marin said there is a purpose for all agencies to train together.

“To try to provide balance across an entire community, these agencies and cities, they make partnerships with each other to work together, train together,” mentioned Dr. Castro-Marin. “So at your hour of need, it doesn’t matter what the shirt says in the back, this city, that city, fire department, ambulance, whatever. You’re getting a quality of care that is matching across the entire geographic region. “