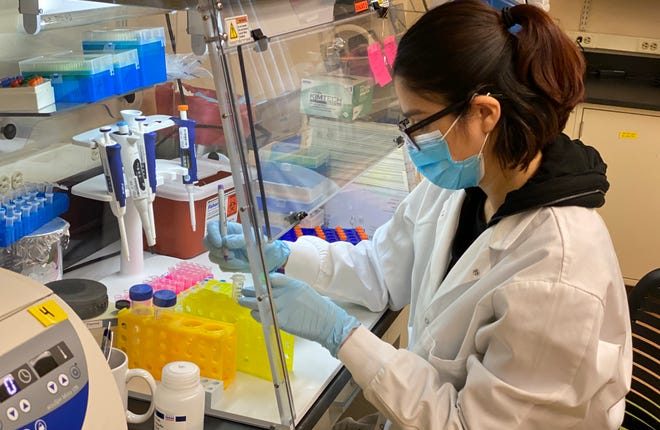 During the height of the COVID-19 pandemic, a University of Arizona agricultural research center in Yuma went from solving desert agricultural problems to also helping communities weather the public health emergency, and even helped prevent COVID-19 outbreaks.

In the spring of 2020, meatpacking plants were shutting down as workers contracted the virus, and Yuma’s agricultural sector wanted to prevent a similar fate. The region grows 90% of North America’s leafy vegetables in the wintertime, as well as other crops year-round.

With such a large workforce crossing the US-Mexico border every day during the growing season, by the summer of 2020, Yuma was considered a COVID-19 hotspot with some of the highest infection rates in the country.

This was of the utmost concern for the agriculture industry. Jesus Tovar of T&P Farms, one of the many investors of the Yuma Center of Excellence for Desert Agriculture, donated $20,000 to the organization to figure out how to keep the industry safe.

YCEDA is a public-private partnership, funded by the agricultural industry and part of the UA. It is positioned to respond quickly to the industry’s pressing needs, dealing with issues like plant disease mitigation, soil health and irrigation management.

Although YCEDA was not typically involved in public health issues, researchers at the center jumped at the opportunity. Tasked with figuring out how to keep Yuma’s agricultural workforce safe during the pandemic, YCEDA quickly came up with a solution: wastewater surveillance for early signs of the virus.

“When you get infected with COVID you excrete it in your feces a week to 10 days before you would ever have symptoms or know you were sick or be contagious,” said Paul Brierley, the center’s executive director.

By detecting the virus in wastewater, researchers could give facilities and local governments enough warning to allocate resources where they were most needed.

With the long distances between Yuma and Tucson, the closest city with a lab to test wastewater samples, it was not efficient or economical enough to send their samples to be tested.

Therefore, the team at Yuma decided to build their own lab modeling that of UA’s Water and Energy Sustainable Technology Center. The West Center made headlines in 2020 when researchers found early signs of COVID-19 in UA’s student dorms by testing wastewater and avoiding an outbreak.

YCEDA received additional funds from the Yuma County Board of Supervisors to help set up a lab.

In Yuma, amid the chaos of pandemic-related shutdowns and supply chain issues, the center set up a lab in just a few months.

Stephanie Slinski, the center’s associate director of applied research and development who set up the lab, said while their team could collect and test samples, they did not have a background in public health to interpret the data and provide actionable insights. That is where Bradley Schmitz came in.

A world-renowned researcher, Schmitz has a background in wastewater testing, public health and research. As the lead researcher on the Yuma wastewater project, he helped interpret the data found by the researchers.

Schmitz also helped develop levels of concern, where each level has different response actions depending on the level of virus found in the county’s wastewater.

The lab not only worked with Yuma county but also with school districts and the private sector. One such company was Datepac, a date-producing facility in Yuma, where the lab helped the company prevent several outbreaks, Brierley said.

One instance occurred shortly after Thanksgiving.

When workers at the Datepac facility returned after their Thanksgiving holiday, the facility’s wastewater showed traces of the virus, meaning people were infected.

The management at Datepac acted quickly, working with a mobile testing unit to test its workers and found five people who tested positive. Those employees were isolated, and the next week the results returned to negative, meaning no one else was infected, Brierley said.

Since the lab’s inception, its funding has grown to over $3.5 million, according to YCEDA.

Gomez said early in the pandemic, the data and actionable insights from YCEDA, allowed the county to notice trends in COVID-19 infection levels before an increase in positivity rates and take action.

With the lab collecting samples throughout Yuma, the county was able to screen for rising infections in targeted sites, which “helped us identify where we needed to prioritize increased testing efforts, and communication too,” Gomez said.

She said this information helped the county not only prepare for increased testing, but also allowed it to track trends and warn the Yuma Regional Medical Center of a potential incoming surge of patients looking for treatment so that the hospital could prepare.

Gomez noted that while wastewater testing was an important tool to understand what was going on in Yuma, it did not replace individual COVID-19 testing.

Gomez highlighted the success of the wastewater testing project and said it is a “model that should be replicated.”

“I think it’s a good example of a government academic partnership,” Gomez said.

She noted that by partnering with an academic institution, the benefits are two-fold: researchers get hands-on experience and local communities benefit from the data they find.

“I think together you can bridge that gap and provide something that is really beneficial,” Gomez said.

She said the state health department also helped fund wastewater surveillance in the city of Tempe and the town of Guadalupe with the help of Arizona State University, as well as in Flagstaff through Northern Arizona University in partnership with the Translational Genomics Research Institute.

Other areas in Arizona also have wastewater surveillance through the CDC’s National Wastewater Surveillance System, Weiss said. These areas include the counties of Maricopa, Mojave, La Paz and Pima.

“Hopefully at the end of this year we will take over those sites and do those more in-house internally,” Weiss said.

Weiss said that during the early stages of the pandemic, academic institutions were positioned to more easily set up wastewater testing facilities. Now, the state is building up the capacity of its public health labs to expand wastewater surveillance for all of Arizona, she said.

With the additional funding, YCEDA’s lab plans to expand its wastewater testing to other targets, Schmitz said. From testing the levels of opioid use in a community, to fungal diseases and other viruses like monkeypox, there is more work to be done.

“We never anticipated the amount of growth we would need at the point we are at now. There is so much need and work for us to move forward,” said Schmitz.

One health perspective a problem solver

This collaboration between public health and wastewater testing, requiring the expertise of a range of professionals across multiple industries is considered a one health approach to solving the world’s most complicated issues.

One Health is the intersection between animal health, human health and environmental health.

Recently, the UA has made One Health research a top priority.

The university’s Mel and Enid Zuckerman College of Public Health recruited Frank von Hippel to lead its One Health Research Initiative. Von Hippel said One Health research is important in solving the world’s most complicated problems.

“If you are working on something like disease ecology and how to prevent pandemics, you need people with expertise from lots of different fields,” he said.

Von Hippel reiterated the severe problems the world is facing today are too complicated to be solved by just one field, it will take interdisciplinary partners, which is where the field of One Health comes in.

“We have this biodiversity crisis, climate change crisis, pollution of the biosphere, so many issues that are existential issues for the planet and for humanity. We need people who are optimistic and problem solvers to come together and solve these problems,” von Hippel said.