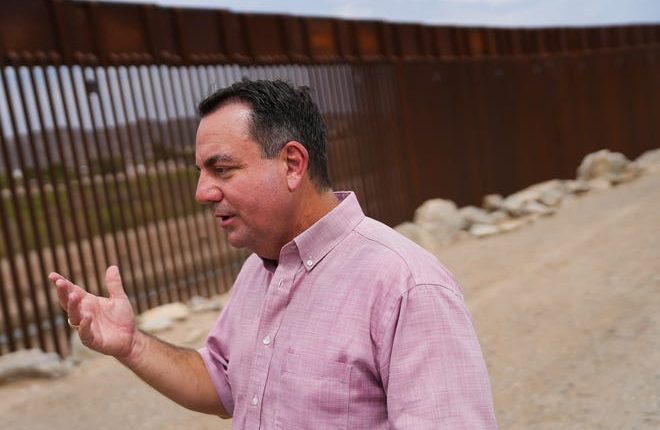 Douglas Nicholls, the mayor of Yuma, garnered media attention in recent months as he tried to bring awareness to the area’s border issues.

Located in Yuma County, a small, rural but important county, the city has busy border crossings from Mexico into the US as well as significant agriculture and defense industries.

Nicholls, who was recently re-elected for his third term in office, talked to The Arizona Republic about the city’s most pressing issues.

Nicholls said the shipping containers recently placed in several of the gaps by Governor Doug Ducey in the wall along the US-Mexico border have helped control the flow of migrants and steered them away from the city. However, he noted they did not secure the border.

The number of immigrants crossing the border into Yuma is still a major concern, the mayor said. The latest data at the time showed that 800 to 900 people per day were crossing into Yuma, Nicholls said.

“We’re always just a day or two away from being overwhelmed,” he said, adding that resources such as agents and non-patrol personnel have increased along the border.

At one of the gaps in the wall near the Morelos Dam, a busy crossing, the governor also placed shipping containers to block the flow of traffic, according to Nicholls.

He said the federal government has plans to close that gap and he was told construction could start as soon as September, although nothing was started as of the time of the interview.

the drought and decreasing Colorado River water levels continue to be big concerns in the city, whose main economic drive is agriculture. Yuma produces 90% of North America’s leafy vegetables in winter.

Nicholls said there were many months of meetings in the farming community, at the state and federal levels as well as engagement with the US Bureau of Reclamation to find solutions for the water crisis.

He said it’s up to the agriculture industry to figure out how to best use their water sources.

“They need the water, so it’s in their best interest to make sure they’re doing everything they can to preserve it and keep the river alive,” he said.

From a city perspective, Nicholls said Yuma has updated its drought management plan and is educating residents about the water situation and what they can do at home to better manage their water usage.

He also said the city is converting some of its retention basins not used as parks into a xeriscape landscape, one that reduces the need for irrigation. He said over the last 14 years the city’s water use per capita has dropped even as the community has grown.

Nicholls said another way the city is monitoring usage is through a program that monitors water flow. This allows property owners to be notified if water is constantly running, which could mean they might have a leak.

Increasing and retaining Yuma’s workforce has increased significantly, especially as more people are leaving rural towns and moving into urban areas, as previously reported by The Arizona Republic.

About half of Yuma County’s population lives in the city of Yuma. According to a city study conducted in April 2021, compared to December 2019, the Yuma County labor force contracted by around 3,500 workers, the largest drop in the past 20 years.

Nicholls said the city just completed a target study to figure out the type of industries and companies that would thrive in Yuma.

With such a large military presence in the region and a thriving agriculture industry, Nicholls said some of the sectors could include AgroTechnology and the defense industry.

Between 500 and 900 US Marines complete their service and leave the Marine Corps annually while stationed in Yuma, he noted.

“Utilizing their expertise, security clearance, their skill set… that’s a prime location for a defense industry contractor to want to come in and set up shop here,” Nicholls said.

Nicholls said Yuma is working with the US Department of Housing and Urban Development’s HOME program, part of which funds affordable housing projects and provides rental assistance to people with low incomes.

The city has also initiated an infill program that develops buildings on vacant or underused land. Nicholls said this program encourages “density creation in the heart of the city” and redevelopment, as well as disincentivizing sprawl into agricultural areas.

For Nicholls, who was born and raised in Yuma, solving issues like these motivate him to continue running term after term as mayor. He first ran eight years ago after his friends and local business owners suggested he do so.

Last month, Nicholls was elected to serve a two-year term as president of the League of Arizona. As for future career moves, Nicholls said he is just focusing on one mayoral term at a time.

“I believed when I ran for mayor the first time, I was going to do one term and here I am on to the third,” Nicholls said. “It’s wherever I can be effective, that’s my motivation — how to help my hometown.”