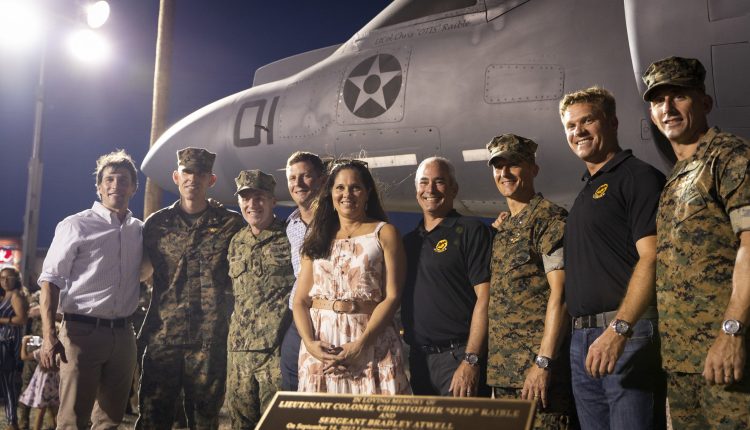 U.S. Marines, veterans, and families pose in front of an AV-8B Harrier during a dedication ceremony at the open air museum on Marine Corps Air Station Yuma, Ariz., Aug. 19, 2021. Marines from the 3rd Marine Aircraft Wing and across the Marine Corps attended a ceremony to unveil and inaugurate an AV-8B Harrier at the museum to the late Lt. Col. Christopher “Otis” Raible and Sgt. Bradley Atwell who lost their lives in an attack on Camp Bastion, Afghanistan in 2012 to defend the aircraft and the surrounding Marines gave. (U.S. Marine Corps photo by Lance Cpl. Alondra Ortiz-Montejano) SEPTEMBER 13, 2021 – Marines, Sailors, Veterans, and the Gold Star families gathered at the Marine Air Station Yuma Open Air Museum to around a retired AV-8B Harrier of Marine Fighter Attack Squadron 211, Marine Aircraft Group 13, 3rd Marine Aircraft Wing in recognition of the late Lt. Col. Christopher Raible and Sgt.Bradley Atwell on August 19th.

The above Marines gave their lives to defend their comrades-in-arms and the VMFA-211 aircraft with no regard for their own good during an insurgent attack against US forces at Camp Bastion, Afghanistan on September 14, 2012.

“They were pilots and attendants,” said the event master of ceremonies, Staff Sgt. Jessup Burton, “They wore overalls and flight suits. No body armor. No kevlar [helmets]. Just rifles, pistols and an understanding that every Marine is a marksman. “

On September 13, 2012, 15 Taliban insurgents arrived at a safe house outside Camp Bastion in Afghanistan to infiltrate the base and target military personnel and equipment. There they procured weapons, ammunition, US Army uniforms, radios and a sketched map of Camp Bastion. The next day they made their way near the eastern edge of Camp Bastion. At around 10:00 p.m. local time, the insurgents entered the area around 750 meters from the hangar of VMFA-211. After infiltrating Camp Bastion, the insurgents split into three teams and launched their attack.

When the insurgents began their attack, Lt. Col. Raible, recalling his training in the Marine Corps, with his Marines to counterattack to minimize potential causalities. As a result of the ensuing battle, nine aircraft were damaged or destroyed while five Marines were injured or killed. During the firefight, an enemy insurgent attempted to fire a rocket propelled grenade at Raible and his Marines before being fatally wounded by Raible’s Marines. As a result, the rocket propelled grenade failed over them, ultimately killing Raible and Atwell. Raible’s initiative to counterattack and the actions that followed preserved the assets of VMFA-211 and saved the lives of the Marines around him.

“They wore overalls and flight suits. No body armor. No kevlar helmets. Just rifles, pistols, and an understanding that every Marine is a marksman. ”: Staff Sgt. Jessup Burton, event master of ceremonies

The dedication ceremony included comments from retired Marine Corps Lieutenant General Jon M. Davis and Col. Benjamin K. Hutchins, commanding officer of MAG-13. Her remarks included introducing the families of the fallen and wounded Marines, intimate retelling of the heroism they had shown, and the fabled legacy of the AV-8B ceremonial aircraft that continued the attack on Camp Bastion.

“If you could look inside [the aircraft] You could actually see bullet holes and damage from which shrapnel was shot that fateful night, ”Hutchins said.

The AV-8B Harrier that was damaged at Camp Bastion was the same aircraft dedicated to the two brave Marines who died to defend it. This aircraft was repaired and remained in service immediately after the attack and continued to provide ground and air support until its final decommissioning, mimicking the resilience and strength of the Marine Corps. In addition, this aircraft would be one of the last AV-8B Harrier operational on the West Coast as the Marine Corps continued to modernize fixed-wing platforms with the F-35 Lightning II. As the country commemorates the 20th anniversary of 9/11, the 3rd MAW remembers Marines like Raible and Atwell who made the ultimate sacrifice.

3rd MAW is still “Fix, Fly, and Fight” as the largest aircraft squadron in the Marine Corps and remains ready for action, deployable at short notice and deadly when it is deployed.

If you have any questions about this press release, please contact the 3rd MAW Communication Strategy and Operations Office at [email protected]