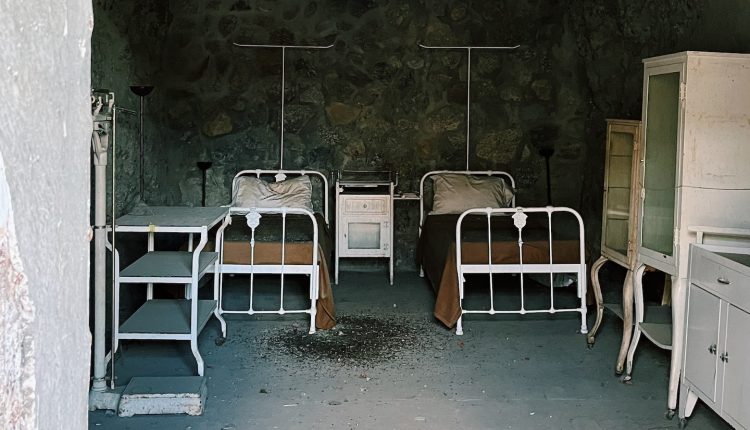 Yuma’s old prison is allegedly haunted. We stayed the night to see.

Yuma’s abandoned prison has dark corners and even darker history. What about ghosts?

YUMA, Ariz. — Three hours into sleeping in my prison-cell bunk, I’m convinced I have some kind of old-timey skin infection. I’d been told earlier in the day that the inmates who were sentenced here more than a century ago used to light their mattresses on fire to kill bugs buried inside. Scratching intense itches on my hands and feet, I stopped worrying about ghosts and started worrying about lice.

I was spending the night in an allegedly haunted prison in Yuma, Ariz. How I got here goes back to October 2021, when I received an email from a stranger named Lowell W. Perry Jr. He’d read my 2020 story about surviving a night at a haunted Airbnb and had a proposition.

As the executive director of the Yuma Crossing National Heritage Area at the time, Perry asked: “If your travels ever bring you out to Arizona, you have a standing invitation to do a follow-up story set in the Yuma Territorial Prison State Historic Park. ” According to Perry, the long-closed prison has been called one of the most haunted destinations in America, and I was free to investigate.

About 150 years ago, the Yuma Crossing served as a gateway to California for people seeking gold-rush fortunes out West. As more action came to the southwestern territory (Arizona wasn’t a state until 1912), so, too, did a need for criminal justice. In 1876, the Yuma Territorial Prison opened to accommodate the stagecoach robbers, murderers, adulterers, revolutionaries, gun slingers, polygamists, con men and rapists of the day.

Dark tourism, explained: Why visitors flock to sites of tragedy

Until it closed due to overcrowding 33 years later, the prison housed 3,069 inmates — 112 of whom died during their stay. Today, some believe the prison grounds — now a designated state park and popular tourist attraction — are haunted by the former inhabitants.

Almost exactly a year after Perry’s invitation, I was locked in the prison for the night, nauseated by fear, despite being skeptical of ghosts even existing.

The ghost claims were disturbing, but not as disturbing as the basic history of the place. There was the inmate who died by suicide, and the woman who was incarcerated for ripping her husband’s heart out of his body.

Are the ‘Blair Witch’ woods actually haunted? I went camping to find out.

I met Washington Post videographer Monica Rodman, who was joining me for the ghost hunt, at a cafe recommended to me by a bartender the night before. Besides crowdsourcing food tips, I asked other cantina patrons whether they believed the local prison ghost lore.

Later, our Lyft driver Manny didn’t hesitate when we asked whether he believed the stories. Of course it was haunted, he said. And Red’s Bird Cage bar across the freeway was, too. I still wasn’t convinced.

The prison is up on a hill on the edge of a border town and is somehow not ominous. From the outside, it looked like what it was: a historic park with a normal parking lot and gift shop.

We were greeted by Mario Ochoa, the prison’s guest services representative, and manager Mike Guertin. They took us on an ambling tour. In the prison yard, Guertin explained what life was like for prisoners.

No surprise: Life was bad. Inmates called it “The Hell Hole,” given that temperatures can surpass 110 degrees in the summer, prisoners could only bathe once a week, and guards taunted them with live scorpions, Ochoa told us. Six men were crammed into the bunk cells with one infrequently cleaned chamber pot. If they needed harsher punishment, they were locked in a cage inside a 15-by-15-foot cave called “the dark cell.” We were welcome to pick either cobweb-covered option as our room for the night.

Why we love a good cemetery

After showering and regrouping at our hotel, we returned to the hell hole where Guertin was waiting to lock us inside. I was filled with dreads. Worst-case scenario, the place would be haunted. Best-case scenario, it was just disgusting.

Inside the museum, Guertin gave us new pillows to borrow. He had to open several padlocks on the door to the prison yard — three of them, plus latches and a deadbolt. It made me anxious.

We chose a bunk cell to set up camp for the night and tossed down our stuff — basics such as a sleeping bag and sleeping pad, but also ghost-hunting essentials such as walkie-talkies, a GoPro, a night-vision camera, flashlights and an electromagnetic field (EMF) meter, which paranormal experts use to detect allegedly supernatural activity.

“How many do you want to open to do your little ghosty things?” Guertin asked. He doesn’t believe in the occult and hasn’t had any suspicions in his 12 years of working at the prison. Although the prison isn’t open to just anyone for sleepovers, other professional ghost hunters have been hosted in the past.

Guertin unlocked the cell where women have reported having their butts pinched when no one else was around, the oldest cell, the dark cell, the infirmary and the cell with two severely dusty beds.

He tried to open the double-gated cell that once housed John Clay, who held the record for most continuous days in the dark cell — a brutal 104. It’s a cell with an unsettling feature: a recording of “Clay” talking about his experience that automatically plays when someone walks by.

Guertin heaved his body weight into the gate, but it wouldn’t budge.

Guertin left us, locking the door to the museum behind him and turning off the lights. He’d be nearby in case of an emergency; all we had to do was call.

Then we were alone. And scared.

I put my sleeping pad and bag on a dust-caked bottom bunk made of plywood and raggedy cloth. From the bed, I could see through into the abyss of another cell.

Because the EMF meter can be triggered by electronics, we held our smartphones and other gear next to it to see whether they set it off. We wanted to be able to rule out false alarms. No reaction.

A local’s guide to Phoenix

A cold, whipping wind messed with our senses. We were laughing a lot. Nervous laughing.

“I feel sick. This feels scary,” I told Monica.

The plan was simple: walk around and see whether the EMF detector picked up anything noteworthy. From watching some ghost-hunting shows, we know you should talk to the ghosts to encourage their activity.

Our pleas did not inspire any activity in the first cell, the one known for butt-pinching.

We passed Clay’s cell, trying to avoid triggering the audio recording by walking as far from the door as possible. It still went off, and we still screamed.

The EMF reader turned red, picking up activity in the yard between cell blocks. I talked myself off the ledge: Guertin had predicted this exact scenario, and that it could be explained by the electricity sources around. We were standing under electricity poles.

The cell with the dusty beds didn’t appear to have ghosts either, despite our offerings of a dollar bill and a piece of candy. No ghost activity in the infirmary or the other prison yard. All we had left was the musty dark cell. I didn’t want to go in.

With each hesitant step into the cave, the air got warmer. We disturbed four or five bats, sending them into a frenzy and us into a panic. Once we realized the bats weren’t attacking us, we relaxed. The balmy temperature and deep quiet were actually soothing.

It was impossible to grasp what it was like for the people once chained in here; Ochoa and Guertin said it was sometimes up to 14 at once. Guards threw snakes at them through a hole in the ceiling. There were no chamber pots.

Monica set up a flashlight on the base of the cage, now all that’s left of the torturous enclosure. Some people say ghosts can communicate with the living easier by way of flashlight; they’ll flicker it to talk. We asked some questions; they went unanswered.

By midnight, we had given the ghosts a chance to reveal themselves, and they hadn’t made a peep. I wanted to retreat. I felt twitchy and vulnerable, eyes darting everywhere, waiting for something to jump out and get me. We crept by Clay’s cell and thought we dodged the recording. We passed it, the recording started and we screeched like banshees.

Being mentally and physically exhausted helped me fall asleep easier than I normally do.

A bone-rattling roar woke me up. It was a freight train passing on the nearby track. Part of the prison had been demolished to make way for the railroad. Its screeching was a perfect soundtrack for a slasher film murder scene — or my real-life murder.

More screams. This time they were mine. It took a minute to register it was Guertin’s voice bellowing from the dark. Monica had texted him to unlock the museum to use the restroom, and he was yelling down the cellblock that the job was done. My heart pounded, and I covered my head with my sleeping bag to protect myself from danger.

Another brief panic from another shrieking train. I’m sweating, sliding around my furnace of a sleeping bag, too creeped out to shed layers and expose myself to zombies, intruders or scorpions.

I’m desperately scratching. Something must have bit me, I thought. Guertin had warned us not to sleep on the ground to avoid creepy crawlers. Were our bunks — a couple of inches above the floor — not high enough to keep them away? I look for bites, lesions or rashes, but my skin looks normal.

At dawn, I wake up feeling surprisingly refreshed for having woken up so many times — even more refreshed than I’ve been on some regular camping trips. Monica, on the other hand, never slept a wink.

“No ghosts,” I tell Guertin, who was waiting outside the prison for us in his truck.

He said something to the effect of, “Of course there weren’t,” and gave us a ride to our hotel. On the way, Guertin mentioned that he had kept watch all night, and there had been a suspicious man coming and going down by the river. Between the fresh pillows and private security, he had gone above and beyond to make the worst travel accommodation of our lives much nicer.

Even if it wasn’t technically haunted, as Perry advertised in that email a year ago, it didn’t need ghosts to be horrifying. It was haunting enough with its dark corners and darker history.