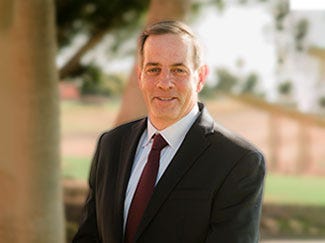 Yuma welcomed his new police chief earlier this month, a US Army veteran and former sergeant at the Prince William County Police Department in Virginia.

Garrity also has three decades of experience, working his way up from patrol officer to sergeant in Virginia.

Throughout his career, he oversaw the building of a new police station, helped solve a nationwide murder investigation and worked in the changing landscape as his urban town grew exponentially.

With all the changes and positions he has held throughout his career, one thing remains certain for Garrity: everyone should be treated with dignity and respect — from the person getting arrested to the victims and witnesses.

This remains in any situation, from a traffic accident to a burglary, he said.

“At that time, it is the most traumatic experience that that person is going through; they are in a crisis at that point,” Garrity said. “It is helping them through the crisis and getting them to understand that is what we are there to do.”

The chief of police at the time, Charlie Dean, said the department would not be enforcing those laws as it is not the job of police to arrest people for being undocumented. Their job is to make sure everyone has a safe community to work and live in, and everyone must be treated “constitutionally, ethically and fairly,” Garrity said.

To this day, that remains one of the most important lessons he has learned in his career.

Also around that time, the police were confronted with a challenging situation: Day laborers were being robbed every Friday night. Law enforcement knew it was happening but with the victims’ mistrust of the government, the department did not know how to convince them to come to them.

Garrity said the way to build that trust was to go into the community and interact with them and let them know that “we don’t care about your status, we care about you being a victim.”

Once that trust is built people begin to cooperate, he said.

In 1994, just four years after Garrity joined the police force, his department decided to implement community policing in a housing area where they were having many issues. Community policing is when the community and police partner to solve problems instead of arresting their way out of a situation, he said.

“If we want to solve the root of the problem, we need the community’s help,” he said.

He volunteered to be one of the first community police officers and discovered how quickly change could occur in such a short period of time.

“That is when I realized, this is the way we do policing,” he said.

That collaboration was also important in one of Garrity’s proudest moments as a leader in the department. He was tasked to come up with a new policing district which included planning for a new police department building.

It took four years of talks between the community, the police officers and local government to accomplish the daunting task.

Garrity still remembers the day it all came to fruition. He recalled seeing the officers line up for the first roll call and noting how proud they were of what they had accomplished professionally.

‘I realized that I could do more in being a leader’

In 2002, random sniper shootings in multiple states near Washington, DC, killed 10 people and injured three while the victims were going about their days. One was pumping gas in Virginia, another was outside of a middle school in Maryland and a third person was walking along a street in Washington.

Garrity was called to help investigate the case, which is referred to as the Beltway sniper case or the DC sniper case, when a victim was shot in Prince William County at a gas station. That period was terrifying for residents all over the area.

“My kids were going to school. They were lining up school buses so the kids could walk in the front door without getting shot,” he said. “You had to go get gas and you had to worry about getting shot in a gas station.”

Investigators found fingerprints at the gas station, which eventually helped lead to the arrest of the two suspects, John Allen Muhammad and Lee Boyd Malvo.

While seeing the case go to trial was a proud accomplishment of Garrity’s during his time on the force, it came with its challenges.

The hardest part was interagency cooperation and working as one unit instead of 13 agencies against each other trying to break the case first, he said.

Over time, Garrity eventually moved up from detective to sergeant to make more of an impact in the department.

“I realized that I could do more in being a leader and showing the new officers this is the way the world works, and this is the way we get our job accomplished through helping people out,” he said.

After 33 years at the Prince William County Police Department and raising his two children who are now grown, Garrity and his wife decided it was time for change.

He had heard about Yuma from his friends that had been to Marine Corps Air Station Yuma and raved about the area. He loved how the community looked out for one another and was so close-knit.

He also appreciated how the police department is beloved by the community, thanks to the work of former chief Susan Smith, Garrity said.

Garrity said his goal is to go out into the community, attend community meetings and meet with current police officers, residents and stakeholders to listen to their concerns.

He also wants to make the Yuma Police Department nationally accredited and a shining example of what a police department should be.

“The women and men who work for that department are dedicated to serving the community,” Garrity said. “I hope to continue that and continue their enthusiasm for that.”