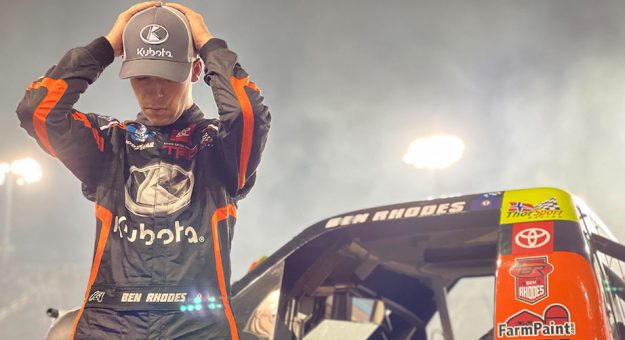 Ben Rhodes’ aspirations of a repeat NASCAR Camping World Truck Series title — and an encore to his boozy champion’s press conference — sank in a dramatic overtime finish to Friday night’s season finale. Instead, the Kentucky native held a distinctly less rollicking post-race interview session as the runner-up at Phoenix Raceway after Zane Smith foiled his bid by a scanned .236-second margin in the Lucas Oil 150.

“Gave it all I had and just didn’t have anymore,” Rhodes said, summing up his day. “We needed more pace all day long.”

Rhodes’ ThorSport Racing No. 99 Toyota just edged out fellow Championship 4 contender Chandler Smith in third. Ty Majeski, the only other title contender in the Phoenix finale, wound up 20th after a late-race crash while battling Zane Smith for second position.

Rhodes had endured handling issues and an uphill fight for track position through much of the 154-lap race, which was stretched four laps past the scheduled distance because of the final caution period for Majeski’s wreck. Rhodes sat seventh before the race’s next-to-last yellow flag — prompted by a Hailie Deegan mishap on Lap 134 — until a savvy pit-stop call helped him make up ground.

No. 99 crew chief Rich Lushes opted for two fresh tires on the right side during that pit exchange, while the other title-eligible teams swapped out for all-fresh rubber. Rhodes lined up third for the restart and rocketed to the lead past Stewart Friesen and Carson Hocevar, who had stayed on the track.

Rhodes led eight laps until both Smiths left him split in the middle on the final restart. The trio diced until the final set of corners, when Rhodes came up to Zane Smith’s back bumper and scraped the wall in a last-ditch effort to get by — “shades of Ross Chastain, I guess,” he called it.

Even without embracing the champion’s trophy for the second straight year, Rhodes lauded the call that nearly provided a winning advantage.

“I liked the fact that my crew chief, Rich Lushes, gives me those opportunities,” Rhodes said. “He’s bold. He makes a lot of crazy pit calls like that, and sometimes they work. We were just on the cusp of making it work. I think if that last restart had come out, we could have held them off and be really happy right now. But I’m not. So here I am. I tell you, I’m thankful for those calls, I just wish it could have worked out differently.”

For Lushes, it was the only call to make.

“We weren’t gonna beat him straight up, so we had to do something different than what they were gonna do,” Lushes told NASCAR.com. “And I figured they were gonna come and put four (tires) on, so I figured the only shot we had if the yellow doesn’t come out there with the green-white-checkered, I think we have a shot to win the race. So that’s all we can ask for. We didn’t have the best truck tonight, so we just tried to play strategy a little bit.”

Rhodes had started sixth and wrestled against ill-handling characteristics that kept his truck mired in the fringe of the top five. He dropped as low as 11th place early in Stage 2, and the team radio crackled: “Gotta regroup here.”

the no 99 team did, and Rhodes gave it his all in the final two-lap dash.

“That’s just shows his growth again that he, no matter what we have, he’s worked through it and fights all day long,” Lushes said. “We just never give up, and that’s why we were in the final four for two years in a row now.”