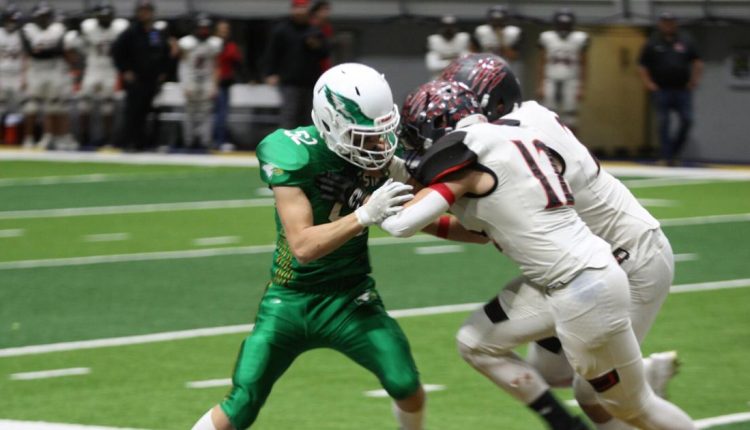 The Bradshaw Mountain Bears started strong and didn’t let up until Friday’s football game in Flagstaff was out of reach. the no 11 Bears defeated Flagstaff (2-7, 0-4 Grand Canyon), 49-6, at the Walkup Skydome in the Eagles’ final home game of the season.

Bradshaw Mountain dominated with his running game and hard-hitting defense to keep his undefeated streak in region play alive at 4-0. The Bears improved to 6-3 overall.

Flagstaff, while unable to stop the run, could not establish its own offensive rhythm.

Flagstaff turned the ball over six times — five occurring in the first half — and gave up an onside kick recovery, giving the Bears excellent field position for an offense that was already moving well.

“I’m not going to hide it, we just had a bad game in a lot of areas. We’ve got to get better and fix it,” Eagles coach Sean Manning said.

Bradshaw Mountain scored touchdowns on six of his first possessions, running the ball consistently. It also scored on an interception returned for a touchdown.

Flagstaff started the game with some promise, as freshman quarterback Chase Brown hit senior receiver Jake Weidinger for a long first down. But, soon after, the Eagles had to punt the ball, and Bradshaw Mountain scored on the ensuing drive.

The Bears kept moving the ball and defending equally well. They led 49-0 at halftime, essentially put the game away before the third quarter.

The Eagles, though, kept many of their starters in and continued to battle in the second half. Flagstaff turned the ball over once more in the third quarter, but matched it with a fumble recovery by senior Tanner Reiff late in the fourth.

“The positive to hang my hat on is that these kids didn’t stop fighting,” Manning said.

Late in the third quarter, the Eagles finally put a couple consistent offensive drives together. On one, junior running back Nikolas Ibarra-Padilla had a long carry that got the Eagles into Bears territory for the first time in the game, though Flagstaff ended up losing the ball a few plays later.

The next drive, the Eagles marched the ball down the field and scored. Brown hit Weidinger for a toe-tapping catch on a fourth-down toss. A play later, sophomore running back Jadon Wetzel scored on a short run to erase the shutout.

Manning was encouraged by the running game late in the contest, especially with how well Ibarra-Padilla played.

“It’s tough for teams to prepare for Jadon, see him and play against him. And then you bring Niko in and he’s a different style, really shifty and nimble, kind of a scat guy. It’s fun watching him, and we’re excited to have another year after him,” Manning said.

The Eagles have one more regular-season game remaining — a road contest at crosstown rival Coconino. The Panthers are similarly out of 4A Conference state tournament contention with a record of 3-6 (1-3 Grand Canyon) and will be looking to find their own happy ending on Thursday.

“We’ve got to put together a better performance against Coconino because they’re no slouch. They’re a good team, regardless of what their record shows,” Manning said.