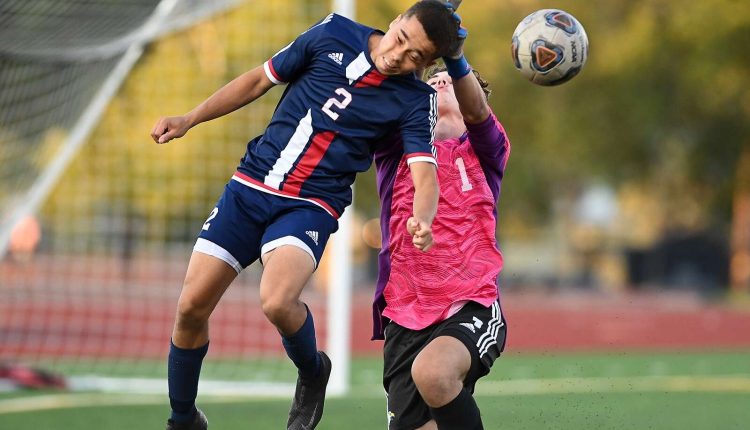 Pirates upset no. 2 Henley on penalty kicks in 4A semifinals

As the early-season losses piled up, Phoenix boys soccer coach Chris Gallegos didn’t flinch in reminding his players that good things would come if they just kept going about their business.

While it hasn’t been easy, the Pirates proved their coach was right Wednesday night in Klamath Falls.

Playing its third road game of the Class 4A state playoffs thanks to its No. 14 seed, Phoenix showed its mettle by earning a spot in Saturday’s championship final with a 2-1 penalty kick win (4-2) over No. 2 Henley during a frigid game played at Mazama High School.

Phoenix went 0-4-1 in its opening five games of the season, playing the likes of North Medford, Crater, Eagle Point and Ashland, but has now won four straight games entering the state final. Phoenix (10-6-1) will next face fifth-seeded Ontario, which beat North Marion 1-0 on Tuesday, at 3:30 pm Saturday at Liberty High School in Hillsboro.

“Setting up the nonconference schedule that we had, playing all those 5A and 6A teams, has really paid off because we’re starting to come alive right at the right time,” said Gallegos. “Those bigger teams really prepared us for these really close, tight games.”

Saturday’s match will be the third official appearance in the championship finals for Phoenix, which lost in 2011 to Molalla and in 1994 to Catlin Gabel. The Pirates also lost in the 4A Showcase championship match during the 2020-21 spring season.

Dramatic victories have been the Pirates’ forte as of late, beating Philomath and then Hidden Valley in overtime before another nail-biter on Wednesday.

After a scoreless first half, the Pirates got on the board in the 42nd minute when Antonio Camargo used some fancy footwork in the box to rip a shot that was initially stopped by Henley goalkeeper Jake Bruner before the loose ball started trickling toward the goal line and Jenner Selden was there to coax it in for good.

With Dominic Crenshaw providing a stabilizing force in the back, the Pirates had already withstood a first-half barrage by the Hornets and seemed anchored in thanks to defensive support from the likes of Cielo Marlia-Larsen, Jayden Moody and Jacob Moody.

Henley, however, was able to draw even in the 73rd minute on a perfectly placed corner kick by Jacob Gonzales and ensuing sharp header from Lello Sguera.

“We started panicking a little bit with 10 minutes to go, playing more boot ball than anything,” said Gallegos. “They got the corner on us and their kid nailed a beautiful header.”

Neither team managed much of a scoring chance in the two 10-minute overtime periods, leading the match to be decided by penalty kicks.

The senior Palomino got his team off on the right foot with a goal in the first shot of the PK session, but Henley was able to answer.

Ethan Martinez made it 2-1 from the spot and Pirates goalkeeper Julius Bolstad blocked Henley’s second kick.

The advantage was negated, however, after Adolfo Camacho was unable to convert for Phoenix and the Hornets soon tied the PK session at 2-all.

Jacob Moody put the Pirates back ahead and then Bolstad, who came up huge all night, breathed life into a potential upset with another stop against Henley to put the tally at 3-2.

“That kid has come alive,” Gallegos said of Bolstad. “I really thought that when we went to PKs we had the advantage because we had Julius. He’s just that kid. He just has this nonchalant attitude and I love it. He just brings that confidence to everybody.”

With a chance to seal the outcome, Crenshaw ripped his shot from the spot into the net to set off a celebration for the Pirates.

“We’re so excited,” said Gallegos. “We just want to get there now. I told them they could celebrate tonight and then we’re back to work tomorrow and Friday and then we’ve got a big one Saturday to take care of.”

AZ native makes a splash in the world of country music