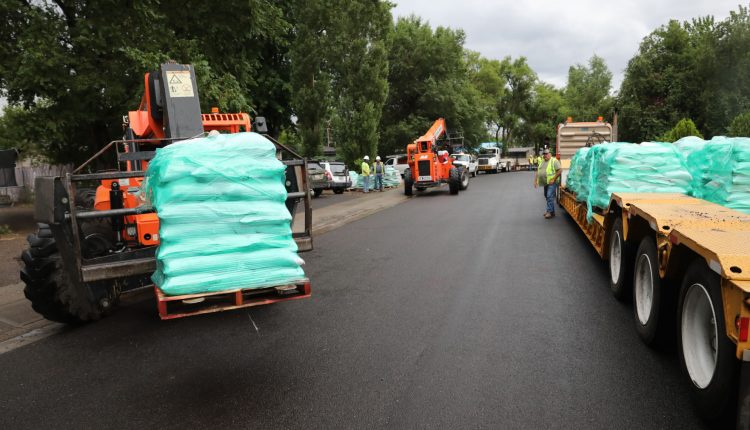 FLAGSTAFF, Arizona (AP) – It’s been nearly two years since a fire burned nearly 8.1 square kilometers in hills north of Flagstaff, but rows of concrete barriers and stacks of sandbags stay in place along a wash across the neighborhoods.

That’s because severe storm surges flowing into the city from the charred watershed in the Dry Lake Hills and through the Wash still have the potential to flood up to 400 homes and businesses.

Flagstaff did not have a major monsoon in 2019 or 2020, so flooding was minimal, but city and county officials in Coconino do not expect the weather to remain dry despite the passage of time since the so-called museum fire. The Arizona Daily Sun reported.

The fire burned 52% of the watershed, and officials said the risk of flooding remains.

The burn scar has barely recovered in the past two years, said Joe Loverich, project manager at JE Fuller Hydrology and Geomorphology Inc.

With little rain, large amounts of ash-baked dirt still cover much of the area and there are few plants left to hold that dirt in place in the rain, Loverich said.

Severe fires not only remove ground covers and plants, which can hold the soil in place and soak up rain, but can also burn hot enough to turn the soil into a glassy substance that increases runoff.

According to Loverich, the modeling shows that a one-hour storm that drops 25 or 51 millimeters of rain on the scorched watershed can cause a significant flood event. This type of storm isn’t very common, but between 2011 and 2020 there were four such storms near the burn scar, he said.

According to the model, water would initially remain in the laundry through one neighborhood, but could then leak out of the laundry and flow up to a foot (0.3 meters) of water into another neighborhood.

Given the possibility of flooding, the sandbags around the houses must remain in place and work is slated to begin this month to prop up and repair the sandbag walls before the monsoons, said Lucinda Andreani, the director the public works of the district.

Andreani said city and county garrisons will place pallets of bags in the area so owners and residents can use them to rebuild walls around their homes.

The Arizona Conservation Core is helping build and repair sandbag walls for elderly or disabled residents who may not be able to do this work on their own.

City spokeswoman Jessica Drum said it was important that the sandbag walls provide full protection and that removing a section could harm neighboring properties and even make a resident pay for damages.

About the photo: Sandbags will be unloaded onto Main Street in the Sunnyside section of Flagstaff, Arizona in 2019 as crews work to protect individual homes from potential flooding in the museum’s fire area. It’s been nearly two years since a fire burned nearly 2,000 acres in hills north of Flagstaff, but rows of concrete barriers and piles of sandbags remain in place in the neighborhoods along a car wash that leads down into town. (Jake Bacon / Arizona Daily Sun via AP)

Copyright 2021 Associated Press. All rights reserved. This material may not be published, broadcast, rewritten, or redistributed.

Do you want to stay up to date?

Get the latest insurance news
sent straight to your inbox.