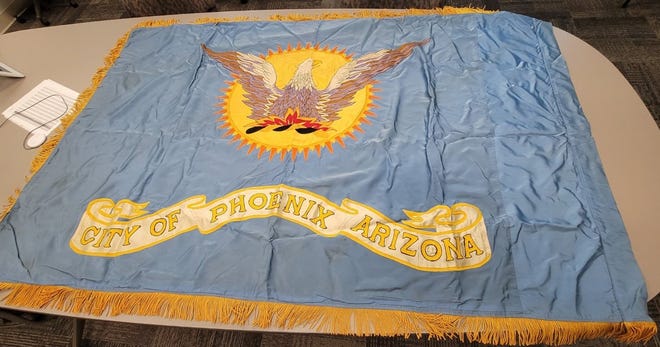 Forgotten design was approved 100 years ago

When a group of historians and history buffs get together to look at old phoenix pictures and then try to outsmart each other with trivia questions, there are a few story ideas to offer. This is one of those stories.

A century ago, state historian James McClintock had discussed a flag for the city of Phoenix. And one tourist even remarked that the motto should be “The Miracle City” rather than “Phoenix Rises”. This tourist believed that the people of Phoenix just didn’t appreciate their ability to create a Garden of Eden in the desert.

A hundred years ago this month, a group of women members of the Chamber of Commerce, led by Maie Heard, came up with the idea of ​​taking a flag of the city of Phoenix to the next level. No more talking or discussing. Instead, these women started a design competition.

Although guidelines were supposedly in place, none were discovered other than a recommendation that “the colors of the flag should be in harmony with those of the national emblem”. Heard offered a prize of $ 25 for the winner.

With the popular competition, the Chamber of Commerce received hundreds of entries and eventually selected one. The mining engineer Frederick C. Green Sr. was declared the winner because the drawing with the first place was judged to be too complex.

In order for the design to become “official”, the City of Phoenix commission had to approve a corresponding regulation. In Ordinance No. 544, the flag was described as “a phoenix bird in gray on a golden sunburst background on a blue background (with a) white band”. Scroll down the bottom of the flag, which has the following legend in gold on it: CITY OF PHOENIX, ARIZONA. ‘”The 48 sun rays represent the 48 states (some rays are hidden by the wings of the phoenix), and gold stripes have cut the border on three sides.

The ordinance was unanimously adopted on November 23, 1921. Mayor Willis Plunkett said the flag would cost $ 175 and all commissioners agreed to the spending.

On November 11, 1921, the silk taffeta flag was displayed for the first time as part of the armistice parade. From then on, the flag was only mentioned in 1929, after the city moved into the new town hall (now the historic town hall).

The flag, which was “hidden in a musty vault in the old town hall”, was “saved from oblivion” and prominently displayed in the commission chambers. For some Phoenix residents, it was the first time they saw or even knew that such a flag existed. But times changed and the flag disappeared from the public again.

A piece of Phoenix history was hidden out of sight and out of mind. However, a new flag design was adopted in 1990.

Coincidentally, the original flag was discovered by one of these history buffs in the town clerk’s vault in the current town hall.

Although the flag does not meet museum standards, especially considering its age, it is a gem. Perhaps the mayor and city council can be persuaded to put it back on at least its 100th birthday in November.

Donna Reiner is the co-author of three books on the history of Phoenix.