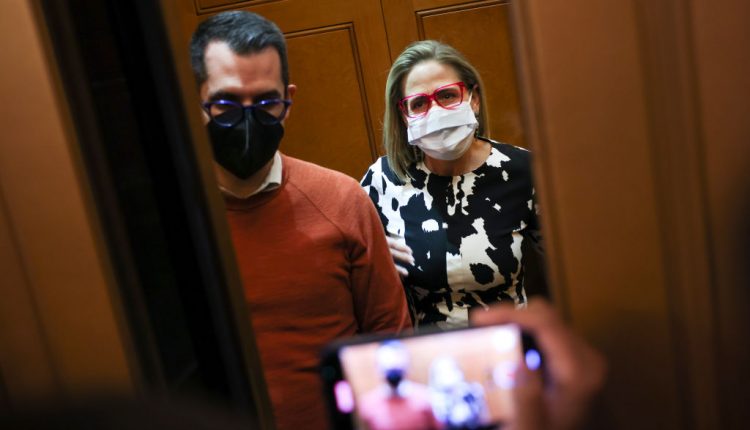 Kyrsten Sinema is no John McCain, try as she might

I’ve held off on criticizing Sen. Kyrsten Sinema since she entered office in 2018 largely because I’ve always agreed with her on one key point: a bipartisan approach to solving our country’s biggest problems is generally a good thing.

The way I see it, our elected officials should wake up every morning and ask not what they can do to sate their political ambitions, but what they can accomplish that most improves the lives of the people they chose to serve.

The trouble with Sinema these days is that she’s confused her determination to get reelected with doing what’s best for her constituency and our country as a whole.

Sinema’s track record since entering Congress, and especially since joining the Senate, has a lot of people asking, “What happened to the Kyrsten Sinema I used to know?”

Many in Arizona remember the days when she called herself a progressive and cared more about the powerless among us than her big money donors.

I remember those days vividly. So, the question I have is: “What does Kyrsten Sinema stand for?”

It’s as if she’s concluded that if she can draw just enough Democratic, Republican, and independent votes to win a second term in office, then she must be doing her job right.

Isn’t that what the person Sinema replaced, Republican Sen. John McCain, did when he was in office?

McCain had his faults, as we all do. The biggest mistake of his political career was picking Sarah Palin as his running mate in his 2008 presidential run against Barack Obama. He was far too chummy with the infamous land developer, Charles Keating. I was also sorely disappointed when he appeared in a ham-fisted “complete the danged fence” campaign ad with now discredited ex-Pinal County Sheriff Paul Babeu.

Sinema seems to think she’s the next John McCain, but she’s only proven to be an unflattering imitation.

Whatever mistakes McCain may have made in his long Senate tenure, he took the job seriously.

Our greatest aspiration, he often said, should be “to serve a cause greater than ourselves.”

The first-term senator treats the job as a game, whose goal is to prove how much smarter she is than her opponents and even the people who voted for her.

Behavior she thinks comes off as shrewd and competent is instead often flip and insulting.

Asked by a reporter this week about progressive Democrats who say they don’t know “where she is” on President Joe Biden’s $3.5 trillion “human infrastructure” bill, Sinema quipped, “I’m clearly right in front of the elevator.”

It was a condescending and juvenile answer. The reporter asked a serious question. The least Sen. Sinema could have done was offer a serious “no comment.”

The senator’s cheeky attitude to her solemn responsibility was also on display earlier this year when she cast her vote on her Democratic colleagues’ proposal to raise the federal minimum wage from $7.25 to $15 an hour.

Here’s how one reporter described what happened that day: “When Sen. Kyrsten Sinema walked onto the Senate floor in March to vote against the inclusion of a minimum-wage hike in President Joe Biden’s $1.9 trillion coronavirus relief bill, the ‘no’ vote itself didn’t come as much of a surprise.” What took people aback was that “after showing up for the vote carrying a chocolate cake, Sinema entered the chamber, walked to the front, paused, formed a thumbs down — a gesture often used by voting senators — and curtsied.”

“So, she curtsied!” I can hear her defenders saying. “Can’t the woman have a little fun?!”

Sure. Enjoy the job. The problem is that there are millions of people in the U.S. who try and fail every day to eke out a living on today’s national minimum wage of $7.35 an hour. To treat the issue so trivially, it’s as if to say, “Watch this, poor people! Ain’t I funny?!”

The unfunny irony, of course, is that Sinema herself grew up in poverty. Or has she forgotten?

Which brings us to her current moment in the limelight as one of two conservative Democratic senators — yes, that’s how far she’s come —who seem bound and determined to tank Biden’s proposed $3.5 trillion “human infrastructure” legislative package aimed at funding the greatest boost to the country’s social safety net since Roosevelt’s New Deal.

Enter Sinema, convinced that this is her chance to complete her metamorphosis from a one-time Green Party radical to an archetypical Arizona conservative.

Is that what this is all about, Sen. Sinema? Is your transformation finally complete? Is this really what you stand for? Or is this just what you think it’ll take to win reelection in 2024?