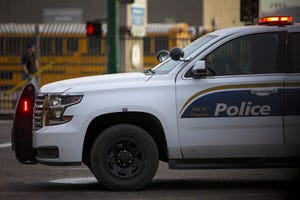 A 23-year-old man is dead and another man has been injured after an early morning shooting in the area of ​​South Mountain Avenue and 24th Street in Phoenix on Sunday.

Officers responded to the scene around 2 am after receiving a call that multiple shots were fired in the area. When police arrived, they located a man in a nearby alley who suffered gunshot wounds, according to Phoenix Police Department.

The man was identified as Steven Magana, 23, who died from his injuries.

Another man who has not been identified, was found with gunshot wounds and transported to a local hospital with non-life-threatening injuries.

Officers found a car leaving the surrounding area that they believed to be involved in the shooting.

Phoenix police said that after a minor police pursuit, the car was in a “minor collision” in the area of ​​Broadway Road and Roosevelt Street. The car had four passengers inside who were detained without incident.

“The occupants of the vehicle do not appear to be involved in the shooting incident at this time,” said the Phoenix Police Department in a statement.

An investigation is ongoing.