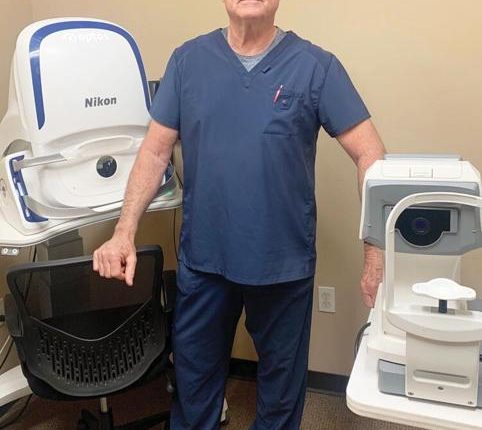 A question Ron Page has probably asked a million times won’t come out of his mouth as of today, May 20th.

“Is it better here or here,” said Dr. Page to the patients as he tried to use his phoropter to determine which lens would give them the clearest view.

Page calls it a career ending 43 years as an optician in Norman and Purcell.

A graduate of Lexington High School in 1970, Page attended Murray State College for a year, Oklahoma State University for a year and a half, and completed his optometry prerequisites at OU for a semester.

Page was one of 600 applicants to the Southern College of Optometry in Memphis, TN in 1974.

They accepted 150 based on GPA and their OCAT score. One of them was Ron Page.

“Back then there were only 12 optometry schools in the country,” said Page.

There are currently 23 accredited optometry schools in the country, the closest in Tahlequah at Northeastern State University.

Memphis and the University of Houston were the two closest when Page applied.

James Tate graduated from the SCO as did his brother John Tate and a sister-in-law, Pat Tate and nephew, Mike Tate.

John founded the Purcell Vision Clinic in 1948 and later sold it to James, said Dr. Page.

Page graduated from SCO in 1978 and wasted no time pursuing his career as a Dr. Ron Page to begin with.

“I graduated on Saturday and went to work on Monday,” Page said with a chuckle, remembering his first day at Purcell.

He worked with his father-in-law, James Tate, at the Purcell Vision Clinic. Page worked at Norman from 1982 to 1992 before Dr. Tate called to sell his practice to Ron.

Page and his family, wife, Dede and the children Jeff and Jennifer moved to Purcell for good.

Ron and Dede were married as a student in 1972.

Page has been on partial retirement for the past two years after merging his practice with Purcell Vision Source and working with Dr. Mendell and Dr. Madden had worked together on North Green Avenue.

Page said the transition was good for his patients.

“I just haven’t left my patients,” said Page. “It’s been a good career and I’ve enjoyed working with Dr. Mendell and Dr. Madden worked together.

Page said he enjoyed building relationships with families over the years.

“I’ve seen grandpa to grandchildren build relationships with entire families,” said Page. “I think my two biggest compliments are one: ‘Thank you for saving my life’ and two: ‘What do I do when you retire?’ I hear that all the time now. “

You can hear the retired optician saying he enjoyed his career very much.

“I never enjoyed going to work every day,” he said. “I missed One day in forty-three years because of illness and then my back went out. “

The Purcell Vision Source Clinic was closed for two weeks, during which time Dr. Page himself from the virus. Since the clinic was in quarantine, technically he never missed a work day.

The most enjoyable part of his career was caring for the elderly.

“I see a lot of cataracts, macular degeneration and glaucoma,” said Page. “It’s interesting when you can help them not go blind. This is definitely that the most rewarding part of it. “