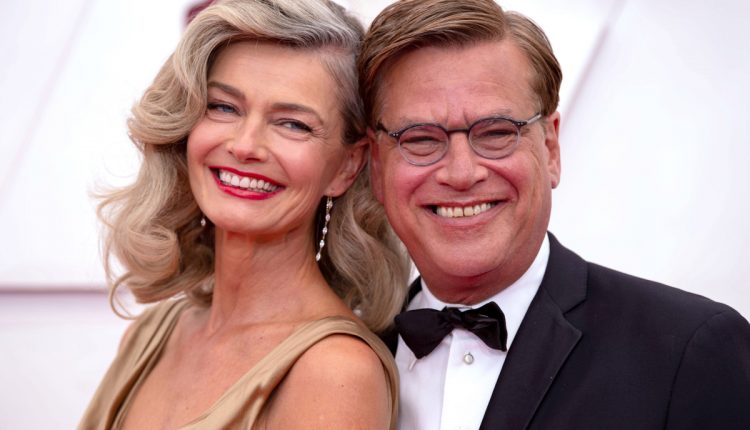 Porizkova and Sorkin made their debut as a couple on the Oscars red carpet in April, where Sorkin was nominated for Best Original Screenplay for “The Trial of the Chicago 7”.

“The intimacy was wonderful; but it was also freezing cold in the room (all that ventilation) which, by the way, also allowed me to snuggle up close to my date. Who kept me warm all night? “Wrote Porizkova about the award ceremony that she shared on Instagram.

In the photo shared by Porizkova, the model wore a vintage gold Dolce & Gabbanna dress while their date wore a classic black tuxedo.

“I thought it would make me look like a female Oscar – if Aaron didn’t win one, he could still take one home,” joked Porizkova at her post.

While Oscars night was the couple’s first red carpet appearance, Porizkova announced to the New York Times that it was only their second date.

Porizkova said the cool temperature at the Oscars gave her an excuse to snuggle up to Sorkin.Getty Images

“This will take me off the market a little,” she claims to have told Sorkin before her debut, according to The Times.

Porizkova was once married to The Cars singer Ric Ocasek, who died on September 15, 2019 at the age of 75. The couple had announced their separation a year earlier, but were unable to finalize the divorce.

Ocasek was found dead in the New York City house he shared with Porizkova. The rock singer died of hypertensive and atherosclerotic cardiovascular disease, according to a medical examiner.

The drama continued after Ocasek’s death when news broke that the singer had cut Porizkova out of his will, which is a subject that is still in litigation, reports the New York Times.

“He messed things up with the will,” Porizkova told the news agency. “It was so mean for us as a family because we’re a pretty close family and that’s not his thing, no one got away happily. Not those who were offended, nor those who supposedly won the lottery. “

Since the death of her late husband, Porizkova has for the most part held back on her love life.

In an Instagram post she shared with Sorkin the day after her second date, Porizkova condemned headlines that repeatedly described their relationship as “age-appropriate”.

“This was by no means my first date. Just my first public date and the effects are staggering to me. Sure, privately I managed to meet men who congratulated themselves on finding me attractive despite my age – five to ten years older than me, ”wrote Porizkova. “But the media surprise about my date with me is a little daunting. Talk about ageism. In the meantime he has developed so far that he can consider himself lucky. Well that’s sexy. “

Phoenix Police arrest a man “in crisis” on I-10 flyover