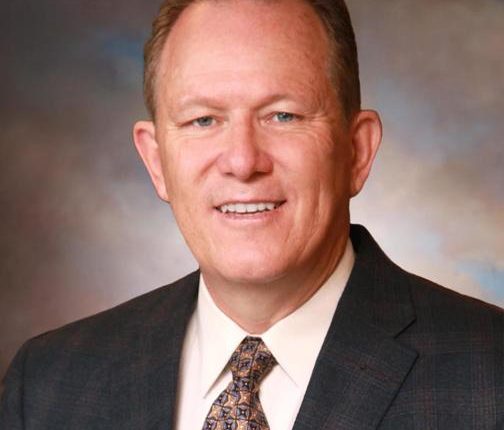 HOLBROOK – Former Show Low Mayor Daryl Seymore was elected as the new Chairman of Navajo County’s Board of Directors this week when two new regulators took their seats.

Seymore immediately praised outgoing Chairman Jason Whiting, who is stepping down but remains on the board.

“The things you’ve done are timeless,” Seymore told Whiting, commending him for guiding the board through both the financial crisis and a pandemic while taking leadership roles in regional organizations and efforts played to restore the forest.

The Zoom meeting was also the first meeting for two new board members, both Navajo and representatives from districts dominated by voters living on the reservation.

Alberto Peshlakai had previously worked for the county as a Navajo Nation liaison and other roles – and for the past seven months for the Navajo Tribal Government.

“I go from the employee side to the supervisor,” said Peshlakai. “I’m glad to be back in Navajo County – I missed it for seven months” while working for the tribal government. “I am glad to have this opportunity to be a civil servant in this capacity.”

Fern Benally also took her place for the first time. She has served as the director of the Navajo Nation’s Forest Lake Chapter House for the past eight years. She also led protest movements and lobbying to force Peabody Coal to address the environmental impact of the massive coal mine on the Navajo reservation, including health issues from air pollution and water supply contamination.

“I’m thrilled to be on the board with you guys,” she said. “I will work to include everyone. Yesterday I met with the county staff and told them that I really needed some guidance on what I was going to do. This is all new to me. I look forward to working with you and getting to know you better. I’m nervous so I stutter – but I think this will all come together after a while. “

The board also elected supervisor Dawnafe Whitesinger as vice chairman. She is a member of the White Mountain Apache Tribe and has worked year-round to tackle a devastating COVID-19 outbreak in reservation communities.

Seymore, a Show Low insurance agent, served on the Show Low Council for 12 years, including seven years as mayor. He was appointed to the board of directors in November 2019 after supervisor Steve Williams was appointed to the state appeals court. Seymore was then elected for a full term last November.

He ran his farmer’s insurance business for nearly 30 years, focusing on economic development issues during his tenure. He played a role in building a new library and council chambers, expanding the town hall, designing the Deuce of Clubs street, and buying three private water companies, establishing a municipal water company, upgrading the water treatment plant, and other urban improvements.

He sold his insurance agency in 2020.

The superiors also praised Whiting for his service. He will remain on the board and continue to play a leading role as a stakeholder in the 4-Forests Restoration Initiative, which remains key to protecting forest communities from the growing threat of forest fires and saving the dwindling timber industry in the area.

During the same meeting, Whiting was named County Supervisor of the Year by the Arizona-New Mexico Coalition. On receiving the award, Graham County Supervisor Paul David praised Whitings’ contributions to natural resource issues such as forest restoration, preservation of the logging industry, and protecting the interests of ranchers in the wake of the reintroduction of the Mexican gray wolf and others.

“Jason comes from a small town. He speaks clearly, but is also comfortable in a boardroom of a company or other large corporation or in the legislature. He’s just doing a great job, ”said David.

The election of Benally will add the voice of an environmental crusader to the board, who in recent years has focused more on economic development and stimulus than on environmental impact. The closure of the Navajo Power Plant and Peabody Coal Mine had a significant impact on the entire county, particularly the Navajo reservation.

She removed District 1 Supervisor Lee Jack, also a Navajo, who has served on the board since 2016.

In a 2013 letter to Peabody Coal, Benally wrote, “The 46-year-old strip mining on Black Mesa is devastating to our people. Pollution from the Kayenta Mine on Black Mesa is visible every day. The coal mine does not extinguish coal fires effectively to prevent the emission of toxic gases. The gaseous pollution poisons and endangers the health of the respiratory tract of our residents. Many miners suspect they have lung disease caused by the coal, but Peabody Western has adamantly denied that coal is the direct cause of lung disease. Residents have noted an increased prevalence of lung problems since coal mining began. It doesn’t require a high level of education to make correlations. Before Peabody arrived there were plenty of natural springs. Natural sources are now extinct. Black Mesa residents are now faced with the daily task of hauling water. “

Company executives refused to meet with Benally and a group of activists who were traveling to St. Louis to end coal mining and the switch to solar and wind power. In fact, they’ve won the argument now that highly polluting, costly coal-fired power plants are phasing out and Navajo County has already approved several wind and solar power plants. These plants produce cheaper and cleaner energy – but also offer far fewer jobs than a coal-fired power station and mine.

Peshlakai also has a long history with the Navajo Tribal Government.

Navajo President Jonathan Nez served on the board during a time Peshlakai was working for the county’s Tribal Government Relations Director.

Nez and a handful of family members attended Peshlakai’s ceremonial ceremony in Holbrook on December 28th. Before Peshlakai’s election to the board in November, he was the assistant to the management of the Nez.

“I am very happy and excited for Mr. Peshlakai and his family. I think anyone who has had the opportunity to work with him knows that he is very dedicated, ambitious and a doer, ”said Nez, who was consumed this year in an effort to contain one of the worst COVID outbreaks in the country . 19th

He replaces Supervisor Jesse Thompson, a Navajo Nation member who served on the board for 28 years, making him the longest-serving board in Arizona.