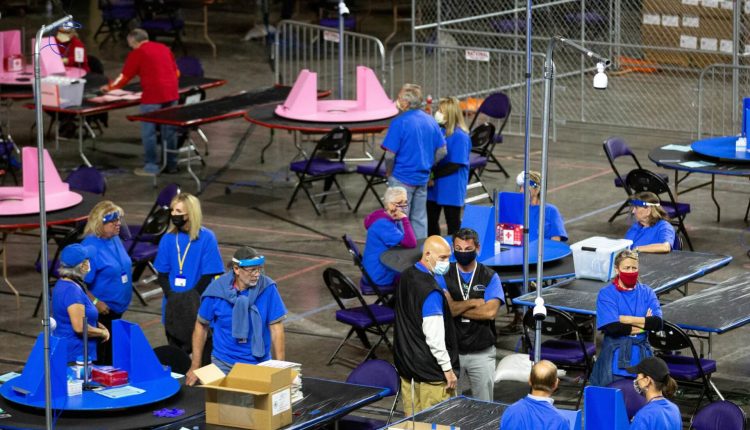 The Maricopa County Board of Supervisors broke the law by refusing to comply with a subpoena for the routers used by its elections department, regardless of whether the Senate has the power to enforce that demand, the Attorney General’s Office has concluded.

The supervisors must now determine whether they’ll provide the disputed routers to the Senate for its self-styled “audit” of the 2020 general election, or whether they’ll appeal the decision to the Arizona Supreme Court. The county has until Sept. 27 to decide what to do.

If the county challenges the attorney general’s findings, it will have to put up a bond worth nearly $700 million, equivalent to the amount of state-shared tax revenue it could lose if it ultimately refuses to hand over the routers.

Senate President Karen Fann first demanded the routers in a January subpoena, and then in a follow-up subpoena in July after the supervisors refused to comply. When the county again refused to provide the routers to the Senate, Sen. Sonny Borrelli, R-Lake Havasu City, asked the attorney general to weigh under a 2016 law designed to punish cities and counties for violating state laws.

In the report of his findings that the Attorney General’s Office released Thursday, Solicitor General Beau Roysden wrote that the Senate unquestionably has the legal authority to subpoena the routers, citing a judge’s ruling in February. He noted that the county never disputed that it refused to fully comply with the subpoenas.

The county argued in its response to Borrelli’s complaint that it essentially wasn’t breaking a state law requiring compliance with legislative subpoenas because the Senate has no power to enforce the subpoenas. The Senate isn’t currently in session, meaning it can’t introduce or vote on a contempt resolution, which is the only enforcement remedy available to it under state law. And even if it were in session, Fann wouldn’t have the votes to find the supervisors in contempt.

But Roysden said it doesn’t matter whether the Senate can enforce the subpoenas — refusing to comply with them is still illegal. Even if the supervisors are correct in asserting that the Senate has no enforcement power, that doesn’t mean they aren’t still violating the judge’s February ruling from its court challenge to Fann’s previous subpoena, he said. And the Senate does have an additional remedy through SB1487, the 2016 law Borrelli used to file the complaint.

“That argument, which addresses only the possible remedy for violating a legislative subpoena, is irrelevant to whether (the Board of Supervisors) is in violation of state law in the first place,” Roysden wrote.

Roysden also rejected the county’s argument that turning over the subpoenas would jeopardize confidential data and create a substantial burden for the county. The county has said it will cost $6 million to replace the routers, which numerous agencies and departments use, if it has to give them to Fann’s election review team.

The supervisors can resolve the situation within the 30-day deadline by providing the routers to the audit team, negotiating an agreement with the Senate to protect sensitive data contained in the routers or by reaching a judicial resolution with the Senate, Roysden said.

The supervisors have not yet determined their course of action.

“The members of the Maricopa County Board of Supervisors are aware of the investigative report issued by the Arizona Attorney General. Board members will meet with their legal counsel and determine an appropriate path forward,” the county said in a press statement on Thursday.

Routers are key to investigation of conspiracy theory

Fann and her “audit” say they want to examine the routers to determine whether they were connected to the county’s ballot tabulation machines during the general election, which would indicate outside interference in the count.

However, election and cybersecurity experts say the “audit” team doesn’t actually need the routers to determine whether the machines were connected to the internet. Fann’s contractors have already examined the tabulation machines, which would provide all the information they need to determine if the machines were sending or receiving information. A pair of audits commissioned by the county earlier this year concluded that the machines were not connected to the internet, as some conspiracy theorists have alleged without evidence.

Nonetheless, the routers have become a fixation for some supporters of the election review. Former President Donald Trump, whose false claims of election fraud prompted the audit in the first place, repeatedly mentioned them during a speech in downtown Phoenix last month.

“The Senate is pleased to see the attorney general stand strong enforcing the laws of our state regardless of who is breaking those laws,” she said in a text message to the Arizona Mirror.

The Senate president did not comment on how long it would take her “audit” team to examine the routers, if and when the county turns them over, or how much longer it will take her contractors to compile a report on their findings.

If the county provides the routers, it will prolong an election review that has already taken months longer than expected. Cyber Ninjas, the Florida company that Fann hired to lead the election review, initially agreed to finish its final report in May. But the counting and examination of ballots, along with examination of machines and other materials, dragged on until late July.

Cyber Ninjas had planned to provide the first part of its draft report to the Senate on Monday, with the remainder delivered at an unspecified later date. But the Senate announced that day that Cyber Ninjas CEO Doug Logan and two other members of the “audit” team contracted COVID-19, causing unexpected delays in the report. Fann also said the remainder of the draft report would be delayed because the county only recently provided digital images of ballot envelopes, which the county said it actually turned over in April.

Lone Mexican wolf leaves tracks in the west in summer