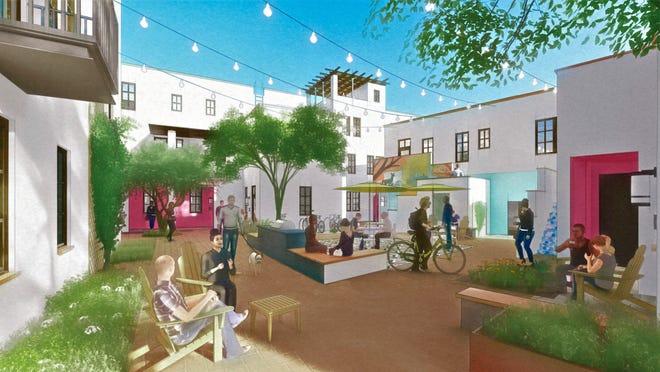 Culdesac Tempe, a car-free neighborhood that opened in 2022, announced a new restaurant concept from Tacos Chiwas, a popular Flagstaff coffee shop and independent grocery store are joining the community.

The $ 170 million project will consist of 761 residential units, retail stores and facilities on 17 acres near the Smith-Martin / Apache Blvd light rail station in Tempe, according to a recent news release.

As part of Culdesac’s development agreement with the city, Tempe waived its parking requirements, the Republic of Arizona reported in 2019. While residents will not have private cars or parking spaces, the retail area will have parking, according to the press release.

Here are the three food and beverage partners coming to Culdesac:

The couple Armando Hernandez and Nadia Holguin from Tacos Chiwas open the Cocina Chiwas, which offers an extended menu from their Taqueria. Cocina Chiwas has a wood-burning oven and grill, and also serves some dishes from the now closed Roland’s Market. Guests can expect cheese chips on homemade tortillas, French toast “with a Chihuahuan touch”, hibiscus margaritas, and chilli-centered dishes.

“We don’t want to be just a ‘Mexican’ restaurant. We want to celebrate regional cuisine from Chihuahua, Sonora and Sinaloa,” said Hernandez in the press release.

Firecreek Coffee Co. has locations in Flagstaff, Sedona and Cottonwood, but owner Mike Funk has plans to expand Metro Phoenix. The cafe offers small-batch coffee made with Northern Arizona roasted beans, as well as optional syrups like salted cardamom and ponderosa vanilla. The menu also includes home-baked pastries and breakfast, as well as beer, wine and cocktails in the evening.

The café doubles as an entertainment venue, so guests can expect poetry slams and music evenings.

Vikram Dhillon, who comes from a family of 7-eleven owners, wants his Street Corner grocery store to have more of a neighborhood supermarket feel than a supermarket. The Street Corner offers fresh produce and groceries as well as pre-prepared meals for on the go with vegetarian and vegan options. Dhillon also plans to create special menus, including cheese and wine pairings for picnics in the park and appetizer platters for special occasions. There are also wines, craft beers, and kombucha on tap.

“I was meant to follow the family business – but with a twist,” Dhillon said in the press release. “The corner store of the future is all about local, high-quality goods and personal service. I’m moving to Tempe to make this possible.”