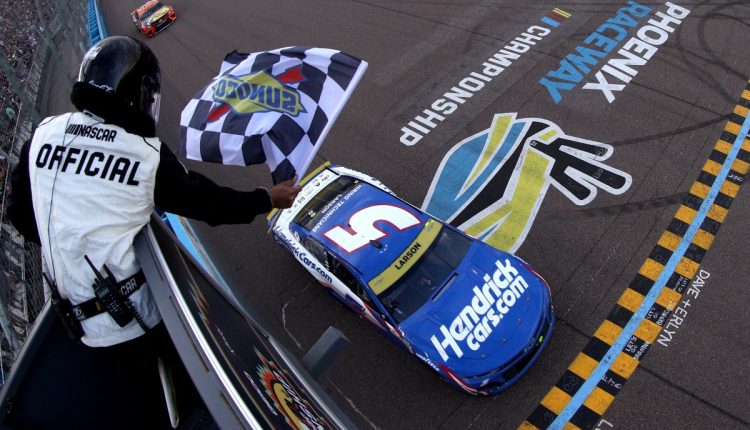 AVONDALE, AZ — Reigning NASCAR Cup Series champion Kyle Larson did not qualify for an opportunity to defend his driver’s title in Sunday’s NASCAR Championship Race at Phoenix Raceway — but he will still be racing for the owner’s trophy.

With his victory at Homestead, Fla. in the penultimate round of the playoffs – and his Hendrick Motorsports teammate Chase Elliott not winning a race during that three-race final push; Larson’s No. 5 Chevrolet is owner’s title eligible, while Elliott competes for the driver’s championship.

“I honestly don’t see it any differently,” Larson said. “I come here with a much focus as I did last season when racing for both championships. Maybe if I hadn’t won last year and didn’t have a championship under my belt already, then I’d come in here with a different mindset. But knowing that I have that on my resume already, it allows me not to be careless with the weekend.

“We’re extremely focused and would love to win that Owner’s Championship for Rick (Hendrick) and bring that big paycheck home too.”

Larson led 107 of 312 laps to win at Phoenix from pole position in last year’s Championship Race- securing his first series title. An engine problem this March relegated him to a 34th-place finish – snapping a six-race streak of top-10 finishes at the one-mile track.

In a weird set of circumstances, Larson is still in on one side and out on the other. Still, it’s a rare feat that HMS could score championships in both points with two different drivers in a comeback that shows that HMS not only is back, their future is as bright as ever before.

“Well, you know, every year you start, you want to race for the championship, and we’ve had a great year,” Rick Hendrick said on Tuesday afternoon ahead of this weekend’s season finale. “We’ve won 11 races.

“It’s that time of year when you go to Phoenix and see what you can do. Thankfully we’ve got two opportunities, one to win the drivers’ championship and the other the owners’.

“It’s going to be a hard-fought battle. There are four really good teams and four great drivers. Anything can happen when you go out there in a one-race deal.

“We’re excited to have the opportunity. It’s always tough to get there, and if you’ve got a car that’s able to compete there, you’re very fortunate.

“We’re excited about the weekend.”

Hendrick joked that he’s going to be broke if Elliott wins the drivers championship but Larson doesn’t win the owners but it’s not necessarily a bad problem to have though either.

“We’ll cross that bridge when we get there,” he says. “But yeah, it’s going to be interesting to watch and try to figure out where we are.

“Hey, both guys want to win, and it would be really neat if we could run one-two. But hey, we’re just going to go out and do our best and we’ll see what happens.

“In an ideal situation is if we could go out and run one-two and get them both. But when Kyle got knocked out, I never thought about the owners’ championship at that point, and then he won the race in Homestead and that qualified him.

“Then when Chase was bumped out of being able to run for the owners’ championship, then all of a sudden we’ve got a shot to win it with two cars, win owners’ and drivers’.

“We’re not going to approach the race any different than we have any week. Both cars are going to try to win. We’ll just go out and do the best we can and see where it all ends up.

“We’re going to try to race to win with both cars. That’s the plan.”

Journalists Cut Through the Noise, From Open Enrollment to Magic Mushrooms