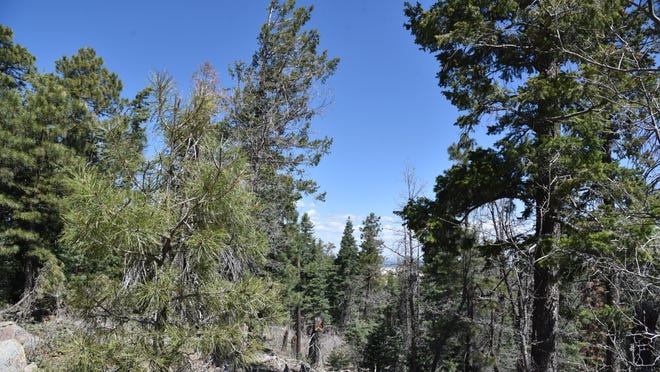 There are few certainties in life, but a firm reality is that things are falling apart. Whether a star that dies in a spectacular supernova or the protracted decay of a favorite pair of shoes, sooner or later everything in nature will decay.

While we indulge in the everyday decays that go right under our noses every day (oil in a car, paint on the house, cells in our brain), the slow burn of obsolescence and decay on mountain roads is more poetic than prosaic .

Perhaps because we don’t look at them every day, the collapse of landforms and man-made artifacts in the backwoods barely registers. And since we’re not trying to fix them, they exist as oddities rather than problems.

A stroll along Forest Road 124C near Mormon Lake reveals several spots where the breakdown is happening with engaging style.

Located at the southern end of Arizona’s largest natural lake, the FR 124C in Coconino National Forest is rugged, double-track, motorized terrain that traces the edge of Anderson Mesa in the Plateau Lakes region 25 miles south of Flagstaff.

The road climbs moderately and steadily towards an unnamed hill on which the fire watch tower of Lake Mormon once stood. From the start, the route leads into a forest dominated by Ponderosa pines and Gambel oaks, distracting from the hum of the cars passing on Lake Mary Road.

At the 0.3 mile point, a narrow back road on the left leads to a cinder pit that looks like a miniature version of Red Mountain, a collapsed cinder cone volcano north of Flagstaff.

The pit, sometimes used by recreational shooters, is a long, broken cliff of volcanic rock with ash gray hoodoos that erode from a cascade of crumbling red ash. Such volcanic features can form over weeks to years, but take millions of years to collapse, as happens here.

Beyond the pit, the road leads into a higher environmental zone, in which Douglas fir, silver fir and cork bark mix with the pines. Between the branches, a glimpse of Mormon Sea, which is going through one of its cyclical collapses, appears like a golden willow. In wetter years, a shallow lake fills the bowl-like depression.

Wildlife Hike:Fork horns could be seen on this trail near Flagstaff

As the forest thickens and the road steepens, a hint of wildflowers reveals the location of the humid environment around Iowa Camp Spring.

Take the non-motorized detour FR 9474D and hike a few meters to visit the site and its stone-walled pen box. Trees, shrubs, and time invade the historical artifact, which looks like it has been a while since water more than a trickle flowed from its rusted pipes.

A small aspen grove stands in a drain to the right around the point where the road reaches a height of 7,600 feet.

Aspens have been in decline in northern Arizona for decades. Stressed by insects, pathogens, drought, frost, elk, and dense forests blocking sunlight, the trees, which reproduce primarily by germinating root systems that can be viable for thousands of years, do not regenerate at a healthy rate. Forest scientists are trying to figure out what is causing the death and how best to deal with the situation.

At the 2.2 mile point, the road comes to a fork where the FR 124B, a non-motorized dirt road, turns right. This junction is signposted, but the street number is not easy to see.

FR 124B leads to the abandoned lookout point and is 277 feet in just under a mile. Near the top of the hill, a metal gate and a trail log mark the last 0.3 km path to the summit. Additionally, the views between the trees are sparse but breathtaking.

A jumble of boulders suggests the recent shutdown and demolition of the former lookout point and cabin on Mormon Lake. On the site was a wooden fire watch tower built in 1915, which was replaced by a 48-foot metal tower in 1927. It’s unclear why the fire tower was abandoned, but the Hutch Mountain Lookout to the south appears to be a likely usurper.

Judging by the dredging tracks on the boulders scattered around the site, the tower’s demise was planned, quick and clean, unlike the other crumbling things along the roads that led there.

Get there: From Flagstaff, travel 25 miles south on Lake Mary Road (County Road 3) to Forest Road 124C on the left after mile marker 319. Park on the turnouts.

For more information on the Mare Czinar walks, visit http://arizonahiking.blogspot.com.

Tucson students returning to school after a year without attending school, local news