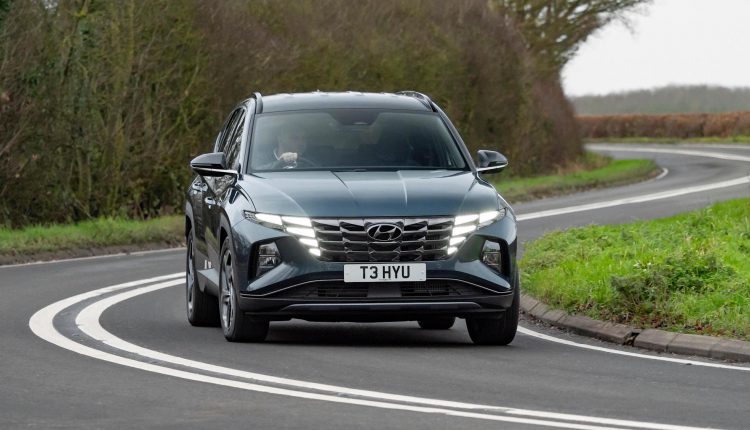 The large front grill is hard to miss

A lot can happen in 15 years, especially in the automotive world. Take Hyundai, for example, which had a number of exceptionally boring and inexpensive models in 2006 that were certainly not very inspiring, that’s for sure.

But the following years have all changed – first as the South Korean automaker successfully made its way into the mainstream (against firms like Ford and Vauxhall) and now with the arrival of core models like the fourth-generation Tucson, it made its way into premium territory. This is now Hyundai’s best-selling car in the UK. But is it really ready to take a more upscale place in the market? Let’s find out.

Large alloy wheels give the Tucson a premium feel

If Hyundai wanted to make sure the new Tucson was unrecognizable to its predecessor, it is sure to be successful. Most noticeable is the fantastic new design which is a huge change. We’ll learn more about it later, but it incorporates Hyundai’s latest design language and is guided by the new ‘Parametric Hidden Lights’ – essentially a grille that lights up.

It is also underpinned by a number of new electrified drivetrains and contains all kinds of new technologies – a special highlight is a “Smart Key” with which you can drive the car with just the key fob. It certainly feels more like a James Bond movie than a family SUV.

What’s under the hood?

Hyundai was way ahead of the opposition on electrification, so it’s not surprising that this type of powertrain plays an important role in the Tucson. There is no longer a diesel option as all drivetrains now revolve around a turbocharged 1.6-liter gasoline engine. You can choose between 148 hp with or without mild hybrid technology, while a mild hybrid version with 178 hp offers all-wheel drive.

Our test car is the regular hybrid model which, thanks to its gasoline-electric structure, develops 227 hp and 350 Nm of torque. Power is also transmitted to the front wheels via a six-speed automatic transmission.

With a speed of 7.8 seconds between 0 and 60 mph, it’s the fastest Tucson available and at the same time relatively efficient for a car of its size – Hyundai claims 49.6 MPg with CO2 emissions of 131 g / km. An upcoming plug-in hybrid will further improve running costs thanks to its 31 mile range.

How is it to drive

The sharp styling continues at the rear of the car

For a manufacturer so knowledgeable about hybrid powertrains, it’s no surprise the Tucson is a good one. It’s sleek, nifty, and punchy when needed (though not quite as surprising in performance as some of the numbers suggest), while it can run as an “EV” longer than usual for a “self-charging” hybrid model is.

Behind the wheel, unlike having fun, it’s largely safe and reasonable. The easy steering is clearly designed for use in the city. However, thanks to its fast performance and well-manicured curl, it’s easy to bring your toe down when the road opens a little.

The only minor gripe is that the large 19-inch alloy wheels can mean the ride is a little choppy and crashing at times. Disappointingly, there is no option for smaller rims on this hybrid model either, regardless of the equipment variant.

Chalk and cheese are the easiest way to describe the new and old Tucson in terms of design, and where its predecessor was boring, this new Hyundai is radical.

While some might find the new design a bit fancy (especially in the top-spec Ultimate spec shown here), we think it’s bold for all the right reasons. It’s all the angles, from the funky shaped wheel arches to the sharp cuts and edges on the side. A thin silver stripe that runs across the window line gives it an almost “coupe-like” design, while the new front end offers an incredible presence.

This is thanks to what Hyundai calls “parametric jewels” on the grille that light up to give the Tucson a unique look on the road. One would expect such a function to be found only on top models from Audi and Mercedes. So it’s great to see such a bold design on a comparatively affordable model.

How is it inside

Hyundai cabs have improved dramatically over the past few years and the Tucson feels like the best ever. From its cool four-spoke steering wheel to its superb quality, this Hyundai certainly feels just as high-end as the equivalent Volkswagen in the interior, if not better.

It’s also packed with technology, including a large, widescreen touchscreen system and digital rotary dials (both 10.25 inches tall and spread out across the range), although Hyundai is the newest company to offer “touch buttons” as opposed to traditional buttons starts to press. While they look cool, they’re quite awkward to use when you’re on the go.

Thanks to the increased dimensions, the trunk space has grown from 513 to 616 liters, and interestingly, this hybrid actually has a larger trunk than the mild hybrid options. The back seat space is also very generous and the Tucson is ideal as a family car even if you have older teenage children.

What is the specification?

The large central screen is clear and easy to use

Given this upscale boom, it’s no surprise that the Tucson’s price has soared. But the new model starts at £ 28,495 – £ 5,000 more than its predecessor – making it one of the most expensive models in the segment. The full hybrid model also starts at £ 32,555, although our top spec Ultimate weighed in at a whopping £ 37,195.

However, all versions have a long equipment list with air conditioning, a reversing camera and a range of driver assistance technologies that are included in SE Connect entry-level versions. A premium mid-range model offers heated front seats, LED headlights, adaptive cruise control and keyless entry. The flagship Ultimate now lives up to its name – with a panoramic sliding roof, electric boots and all sorts of additional safety technology.

Hyundai has managed to more or less conquer the mainstream market and is now moving into the premium area. It’s a bold move, but the new Tucson feels like the right car for the job. In a segment where design and quality play a big role, this SUV really impresses and feels special when you look at it and be there.

The hybrid system is also one of the best, while its large, practical interior makes it ideal as a family car. While the choppy ride could be improved and – of course – the big problem of the price hike, this Tucson is a suitably modern reinvention that is a step ahead of its predecessor.