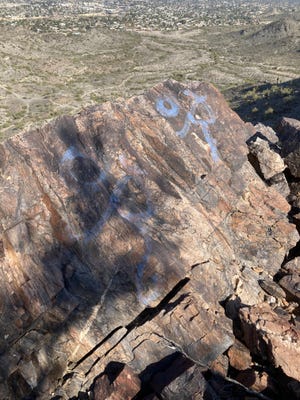 A rock near one of the most popular hiking trails in Phoenix appears to have been defaced with what look like stick figures doing yoga poses.

One of the figures appears to be doing natarajasana, also known as dancer pose, though the markings also may look like the letters “O” and “R” written sideways.

The Reddit user shared the approximate location where they claimed to have found the defacement — which appears to be an area off the Perl Charles Memorial and Piestewa Peak Freedom trails, west of the connection with the VOAZ Trail — in a message to The Arizona Republic.

Though graffiti is illegal, it’s unlikely that the perpetrator will be fined if they are found.

According to Ashley Patton, deputy communications director for the city, park rangers “must physically observe the violation in order to issue a citation.”

Don’t be this person:A TikTok star hit a golf ball into the Grand Canyon. Here’s how much that stunt cost her

What does Phoenix do about graffiti vandalism?

It’s not unusual to find litter and vandalism on the city’s more than 200 miles of trails. However, Phoenix has laws prohibiting graffiti — including one detailed in Chapter 24, Article II, of the city code. Vandalism in a park is defined, in part, as “Defacing, damaging, disturbing or excavating any historical, prehistorical, archaeological, paleontological or geological site or feature.”

Someone convicted of such a violation would be guilty of a Class 1 misdemeanor. They would be fined a minimum of $100, pay restitution to the city and be required to do at least eight hours of community service.

Someone who commits vandalism in the Piestewa Peak and Dreamy Draw area is not only illegally damaging city property but also the homeland of “the O’Odham and Piipaash peoples and their ancestors, who have inhabited this landscape from time immemorial to the present day,” as written on land acknowledgment signs found at trailheads.

The Republic has asked city representatives for more information about who cleans up vandalism at mountain preserves.